For two weeks, the headlines and nightly news story lines have focused on increases in the number of positive tests for COVID-19. Yet the stock market has shrugged off the news. Most investors seem to have understood that with the United States leading the world in testing, it is to be expected that the number of positive cases would increase.

And while the percentage of cases confirmed positive has also increased and there are pockets of activity that contradict the national trend, overall, the hospitalization and death rates continue to fall across the country. This comes as measures of mobility that had been down over 50% have cut that deficiency in half, according to the Institute for Health Metrics and Evaluation. 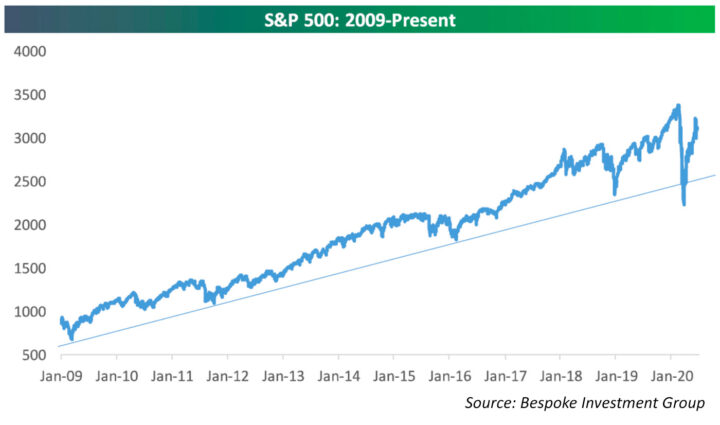 The S&P continued its move higher as it seeks to establish a new all-time high, while the NASDAQ Composite and NASDAQ 100 Indexes have both reached that mark once again. However, the nearly straight-up ascent that we saw in the first 50 days coming off the March 23 market lows has failed to reappear. Two weeks ago, we even saw the climb interrupted by a 5% plunge in the major stock indexes, only to be mostly erased in the days that followed.

The quick down day did work off some of the exuberance that had concerned us a few weeks ago. It moved stocks from overbought territory (the red area in the following chart of the S&P 500) to middle ground where recent price action need not impede future growth. Coincidentally, market sentiment among small investors as measured by the American Association of Individual Investors weekly sentiment measure saw bullish sentiment fall to lower-than-average readings and bearish sentiment move in an opposite manner. 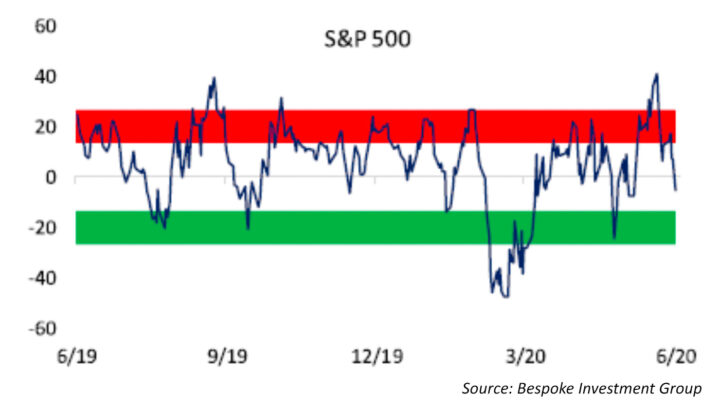 In spite of the headlines and investor sentiment, the market averages continued to move higher due to a wave of positive economic news sweeping across the economic ledgers. As bad as the news was in March and April, the May reports have reversed the flow and seen record turnarounds in most economic measures. Retail sales, the New York and Philadelphia Fed manufacturing reports, the NAHB Housing Market Index, and the Leading Economic Index—all have bounced substantially off their recent dismal lows.

While most measures remain depressed from where they were as recently as February, the Citigroup Economic Surprise Index, which measures the number of economic reports that come in ahead of economists’ forecasts, moved to its highest level ever! 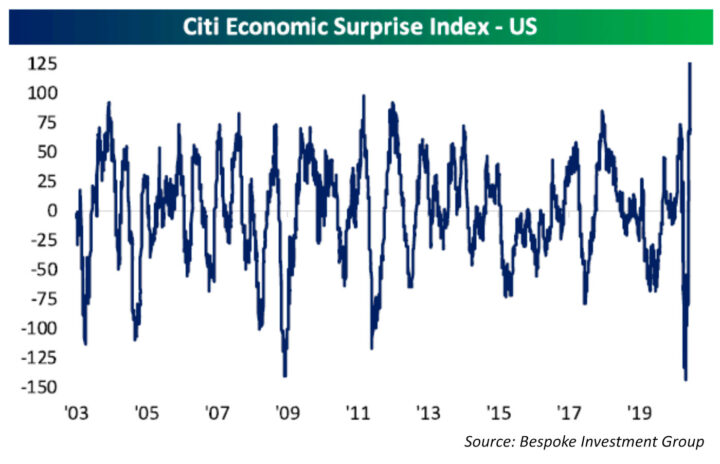 While the economic news has been improving at a better-than-expected rate, and stocks have been advancing again, the market indicators are not uniformly positive. While news on the Citigroup index is exciting, high points, while positive in the short term, have historically led to mixed or down results over the longer term. After all, it’s hard to exceed such heights, and the road down looks easier to accomplish.

One contrarian bright spot is that such heights have been almost uniformly bad for the U.S. dollar. A declining dollar is usually good for gold and may, together with the Federal Reserve’s dollar-gushing printing presses that seem sure to eventually send inflation soaring, propel the yellow metal to $2,000 per ounce or higher.

This same analysis seems to apply to most of the economic indicators when tested for their historical inclinations at these levels of extreme readings. At the same time, our Political Seasonality Index continues to be in a negative mode for one more week and does not turn positive until the close on June 30. (Our Political Seasonality Index is available post-login in our Solution Selector under the Domestic Tactical Equity category.)

One positive seasonality indicator to watch for at that time is where the close of the Dow Industrial Average is at month’s end. A close above 25,383.11 would mean that the Dow has triggered a “second quarter trifecta” buy signal, which occurs whenever each of the three months of the quarter closes higher. Such a signal has occurred 17 times since 1901, and 14 of the signals have seen the Dow move higher nine months later to the tune of 15% average gains. The average down move was just 1.1%, and the last losing trade was in 1919! 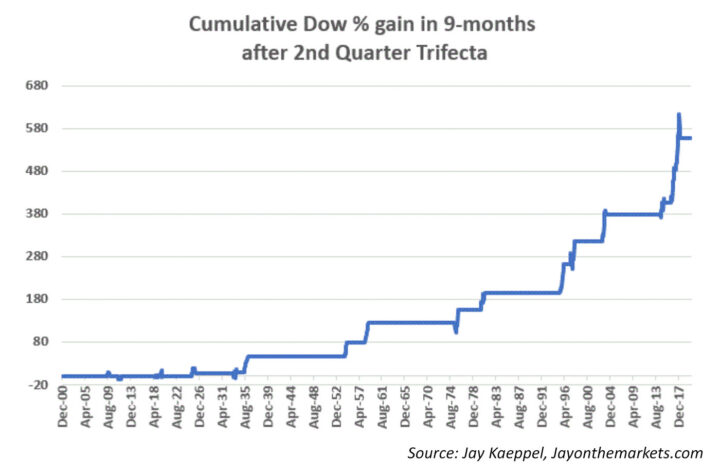 Still, it’s easy to get carried away and think that we are at the beginning of a replay of the 2009–2020 bull market. This seems extremely unlikely. For example, the relative-strength index of the NASDAQ to the S&P 500 shows that we are at levels not seen since the beginning of the last year of the tech rally. When that rally ended, tech stocks were lower by 75% or more.

Furthermore, the market is at the overvalued extreme on the traditional PE ratio measure. As the following chart demonstrates, while the market can continue to be overvalued for a time, eventually it can turn around and fall rather substantially from these levels. 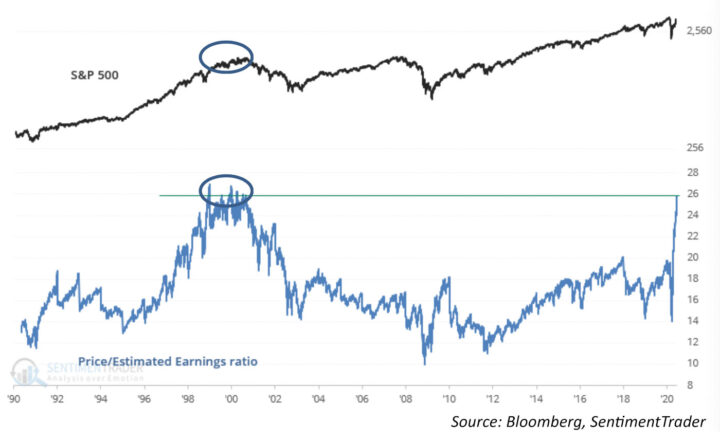 Our intermediate-term tactical strategies remain uniformly positive, although to various degrees. The Volatility Adjusted NASDAQ (VAN) strategy has a 20% exposure to the NASDAQ, the Systematic Advantage (SA) strategy is 120% exposed to the S&P 500 (but that’s down from last week’s numbers), our Classic strategy is in a fully invested position, and our Self-adjusting Trend Following (STF) strategy remains 120% invested. Our short-term QFC S&P Pattern Recognition (PR) strategy has returned to a 160% exposure level. VAN, SA, STF, and PR can all employ leverage—hence the investment positions may at times be more than 100%.

Among the Flexible Plan Market Regime indicators, our Growth and Inflation measure shows that we are now in a Deflation economic environment stage (meaning a negative monthly change in the inflation rate and negative monthly GDP reading). The Commerce Department recently reported that the GDP fell at a 5% annual rate in the first quarter. The first estimate reported was -4.8%.

Deflation is the worst regime stage for stocks and the only stage that is slightly negative for gold. Bonds seem to do the best in this stage. Since 1972, the economy has been in a Deflation stage only 3% of the time. Given the unusual impact of the virus on the economy, history may be less of a guide this time. We shall see.

May you be safe and healthy in these trying times,