Getting that Seinfeld feeling about your investments?

I don’t know whether you are in a state that is beginning to get out from under a stay-at-home order or if you are, like us here in Michigan, still very much in the shelter-in-place mode. But one thing I am certain of—you want to get out of the house and do something. Anything!

Even that trek to the supermarket or the pharmacy is beginning to take on the feel of a major adventure. But it’s not enough. And you can only watch so much Netflix!

Still, this weekend I watched Jerry Seinfeld in a new stand-up special on the network. Even though it was recorded before the coronavirus scare, it amazingly captures a view of a part of the human psyche that is emerging from the subconscious and is demanding to be heard like a long-lost relative at the reading of a will.

In the opening bit of the special, Jerry—in his staccato, “New York” manner of speaking that we became so familiar with during the “Seinfeld” show’s 10-year “Best Sitcom” run—congratulates his audience on being at his show, and also for getting out for the evening:

People talk about going out—“We should go out—let’s go out. We never go out.” Well … this is it.

Now, the good thing about being out is that you don’t have to be out for long.

Just long enough to get the next feeling, which you’re all going to get. And that feeling is “I’ve got to be heading back.” …

When you’re at work, you want to get home. You’re home, you’ve been working all week, you gotta get out. You’re out, it’s late, “I gotta get back.”

“I gotta get up. I gotta get to the airport.” “When are we getting on the plane?” The plane takes off, “When is the plane going to land? Why aren’t they opening the door so we can get out?”

NOBODY WANTS TO BE ANYWHERE!

The need to do something

While Jerry makes it clear that this need to be doing something has essentially always been a part of the human condition, I think it is evident that this condition is being exacerbated to the max by the stay-at-home orders. Not only do people want to go out because they have been cooped up inside, but some argue that many want to go out simply because they are not supposed to go out. Regardless, it has certainly become something about which to protest.

Whether the protestors are right or wrong, the existence of this innate human need to “do something” is apparent to most everyone now, but it has always been something money managers have had to address. Most financial advisers will acknowledge that while clients come to them for a financial plan, the real work begins after the plan is delivered.

Especially for those invested in a buy-and-hold or passively allocated portfolio, sticking to “the plan” is something that just does not come naturally. They are always fighting that instinct to do something—particularly when the stock or bond markets are falling. Not only must each investor fight the urge to flee, but their adviser must expend a great deal of energy providing them with support, whether personally or by way of content, to stick with the plan.

The Wall Street crowd all runs together like a herd of buffalo in their support of passively allocated portfolios. As a result, most professional gatherings spend a great deal of workshop time on how advisers can talk their clients into holding on to the investments they bought when prices were high, and now can’t wait to unload as prices fall.

Of course, the financial media follows suit. All too readily, they repeat the same tired mantras as prices fall 10, then 20, even 30 percent: “Just hold on, it will come back!”

And they’re right—eventually, it always has come back … eventually. I remember, for example, after the 2000–2002 crash, it took seven years to get back to breakeven and over 14 years to outpace an investor investing in three-month Treasury bills, but stocks did come back! 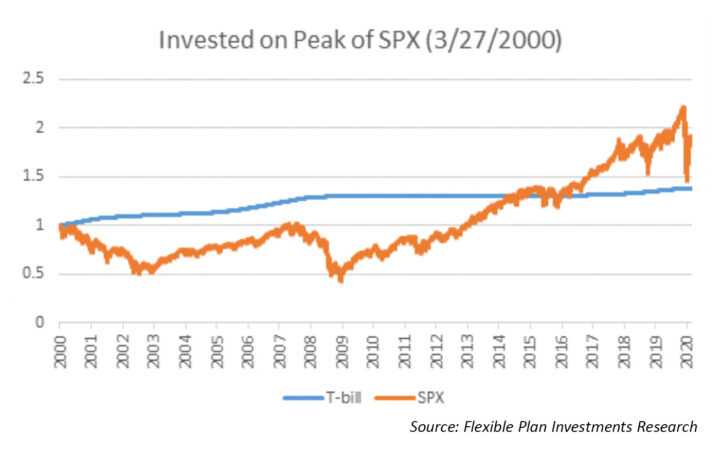 Looking back at all of the crashes just in my nearly 50-year investing lifetime, I can’t say I blame investors. They can’t be faulted for having a bad case of cabin fever when they are told to stay at home in their passive allocation accounts while the markets go through a crisis.

It’s time to stick with the plan

Back in 1981, when I founded Flexible Plan Investments (FPI), I did so to give investors an alternative to “buy-and-hope” investing: dynamic risk management. We delivered our portfolios through separately managed mutual fund (and ultimately variable annuity and ETF) accounts. Each individual could have actively managed strategies that met their own suitability needs as expressed by their answers to our suitability questionnaire.

No longer would investors need to fight their instincts and simply buy, hope, and wait when the markets fell. Instead, we would supply time-tested strategies and the discipline to follow them. These are strategies that respond to market movements in the best manner, as determined by probability-based decision-making, rather than the simple human emotions of fear and greed.

The irony is that in delivering this type of investment to investors, I’m now in the same position as other financial advisers who have been telling you to follow the plan and hold on to your investments.

Today we are rebounding from a historic break in the markets. On February 19, stocks went into a swoon that sent the S&P 500 Index down more than 30%, and even bonds and gold had some turbulence. Yet at the end of the first quarter, our average account was down just over 5%.

Since March 23, stocks have been rallying. Some indexes have finally returned to profitability on a year-to-date basis, and a few are even approaching their old highs.

And that ancient instinct is resurfacing among investors. That need to do something, to do anything, is reemerging. That leaves me having to counsel you, like my buy-and-hold compatriots have been counseling their clients, “Stick with the plan.”

It sounds the same, and, believe me, I don’t want to be grouped with that crowd, but it is true. You do need to stick with the separately managed accounts, the dynamic, risk-managed plan that we—you, me, and your financial adviser—worked out for you.

But there is a difference. The “buy-and-hope” adviser is trying to get you to stick with a plan that does what the Seinfeld show was all about. You remember—it was the show all about NOTHING. And the “buy-and-hope” action plan involves doing nothing.

In contrast, we here at FPI, together with your financial adviser, ask you to stick with a plan that involves action, a plan that was built to respond to the markets’ ups and downs for you. Flexible Plan was built to carry out dynamic risk management of your investments so you don’t have to do it yourself.

So if you have cabin fever or that “I want to be anyplace but here” feeling about your investments, realize that you have us to do the worrying for you. And even more, you have us to take the action necessary to deal with whatever the markets may have in store—be it revival or depression, shutting down or opening up, we are continually monitoring your investments and taking the actions dictated by our time-tested methodologies.

And if you want to get out of the house this weekend, well, remember what Jerry Seinfeld said: