While the stock market fell for the week, it finished with a flourish as it rallied on Thursday and Friday (May 14–15). Of course, Monday’s (May 18) explosion higher, which began with a 3%-plus gap opening (it began the day over 3% higher than where it closed on Friday), further extended the gains from late last week. The result was an upside breakout above near-term resistance.

The following chart shows that the S&P 500 has moved into overbought territory for the first time since February. While such a move can signal short-term weakness, the chart also demonstrates that when the Index moves into the red territory (meaning it is overbought), it usually stays there for a while, and that suggests intermediate-term strength. 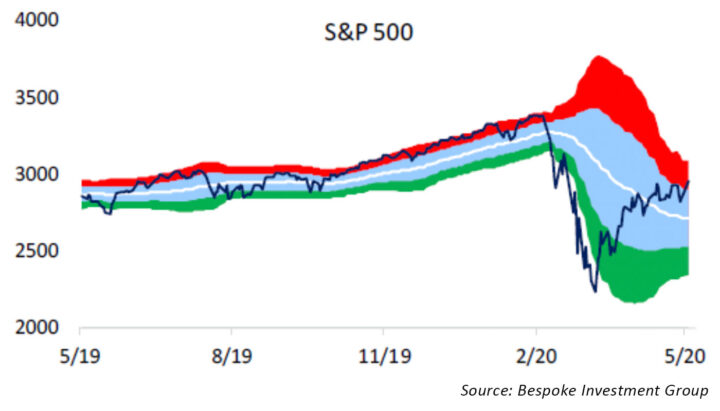 Why is the stock market doing so well in the face of a global pandemic and unbelievably bad economic reports?

This is a question I have been hearing a lot lately.

The pandemic is indeed causing the economic reports around the world to register results we have rarely, if ever, seen. Retail sales have fallen more than expected, crashing 23% in the last two months.

Witness the following long-term chart of industrial production here in the United States. This indicator has been tracked back to 1919, and we have not seen a reading this low in all of that history—not in the 2008 financial crisis or even in the Great Depression of the 1930s. And 35% of our industrial capacity is sitting idle!

Yet the stock market rises. Why? Because market indexes reflect not today but instead what investors believe its component companies and the economy are likely to deliver in the future. So when we go back in time and look at when the economic readings for unemployment, gross domestic product, and earnings-per-share growth have been at their worst, the annualized, next-year’s gains thereafter have actually been the best for stocks!

In addition, many of the economic reports are starting to turn more positive. While some remain at terrible levels (like those described above), others (such as unemployment claims) have moderated or turned positive (such as consumer confidence). The New York Federal Reserve Weekly Economic Index has started to turn around.

On the pandemic front, testing continues to surge, surpassing 365,000 per day. However, the percentage of tests showing positive readings continues to plummet—falling from 25% down to under 7%. Deaths also seem to have peaked and are slowly falling as we learn to better treat the disease and the effects of social distancing work their way through the economy.

At the same time, with the shutdown, the minimal impact on most age groups, and the lower infection rate, the signs of the economy opening up again are everywhere. Even here in Michigan, where controls have been extreme, manufacturers have been allowed to open up again. A review of mobility around the world made possible from Google cellular phone statistics shows that, while the movement numbers are still low, they bottomed in mid-April. Since then, people have started to go to work again.

The stock market feeds off positive and emerging positive trends.

Does this mean that everything will continue to be rosy for stocks?

One should never assume that what is happening now will continue uninterrupted. This is especially true in the stock market. The Monday 3%-plus opening gap higher that I spoke of earlier did constitute a breakout, but history tells us that in the very short term such gaps more often show a decline over the rest of the week (almost 2% on average). Similarly, while we have yet to show an increase in bankruptcies of small businesses, perhaps due to all of the stimulus money flowing from Washington and the Federal Reserve, we know that historically, high unemployment is usually followed by a high number of bankruptcies.

Another concern is inflation. Inflation is an indicator that is good for the stock market and the economy … in moderation. It’s good when price growth can keep the economy in an uptrend. But when inflation is extremely high or turns negative bad things usually follow.

Right now, we are in an interesting period where we could experience either or both extremes. Over the last two months, the rate of inflation has actually decreased, warning of what many consider the worst of all worlds—deflation, falling prices and falling GDP. Yet year-over-year rates of inflation remain positive, so we have not fallen over that edge yet.

At the same time, the unprecedented level of monetary action from the Federal Reserve and the fiscal stimulus coming from Washington have been flooding the nation with cash. In the past, similar stimuli have caused inflation to move higher and spiral out of control.

Why hasn’t this happened this time? The shutdown has caused a different reaction so far. While there has been a lot of money thrown at the problem, consumers have been slow to spend it. In fact, the velocity of money (its rate of moving around the economy) has crashed to levels not seen for at least 60 years!

The velocity of money is the number of times one dollar is spent to buy goods and services per unit of time. If the velocity is increasing, then more transactions are occurring between individuals in an economy.

This also reflects the main concern going forward for the economy. Supply has been reduced, money is available, but when will consumer demand increase and be felt by retailers and manufacturers? We can’t truly turn around until two things happen: (1) we fully reopen and (2) consumers participate in spending as that reopening occurs.

Earnings-reporting season for the first quarter of the year officially ends today (Tuesday, May 19) with the Walmart earnings report. A little better than 60% of reporting companies have beaten both their earnings estimates and revenue projections. These are slightly above-average readings, and this has historically been positive for stocks.

Both sentiment and seasonality readings are bearish in the short term. Price patterns have continued to turn more negative in the short run (up to three months). Still, the short-term trend indicators we monitor remain positive. The very short-term-oriented QFC S&P Pattern Recognition strategy’s equity exposure, which had switched early last week to a near-zero (0.8%) reading, came roaring back the next day to 80% exposure again and has been participating in the latest three-day rally. At Monday’s close, after the day’s big gains, it switched back to near cash (0.8% S&P 500 exposure).

Similarly, our intermediate-term tactical strategies remain mixed: The Volatility Adjusted NASDAQ (VAN) strategy has finally moved back to a 0% exposure to the NASDAQ, the Systematic Advantage (SA) strategy is 112.5% exposed to equities, our Classic strategy is in a fully invested position, and our Self-adjusting Trend Following (STF) strategy remains 100% invested. VAN, SA, and STF can all employ leverage—hence the investment positions may at times be more than 100%.

Among the Flexible Plan Market Regime indicators, our Growth and Inflation measure shows that we are now in a Deflation economic environment stage (meaning a negative monthly change in the inflation rate and negative monthly GDP reading). Deflation is the worst regime stage for stocks and the only stage that is slightly negative for gold. Bonds seem to do the best in this stage. Since 1972, the economy has been in a Deflation stage only 3% of the time. Given the unusual impact of the virus on the economy, history may be less of a guide this time. We shall see.

That’s it for this week. All of us here at FPI wish you health and safety in these trying times,