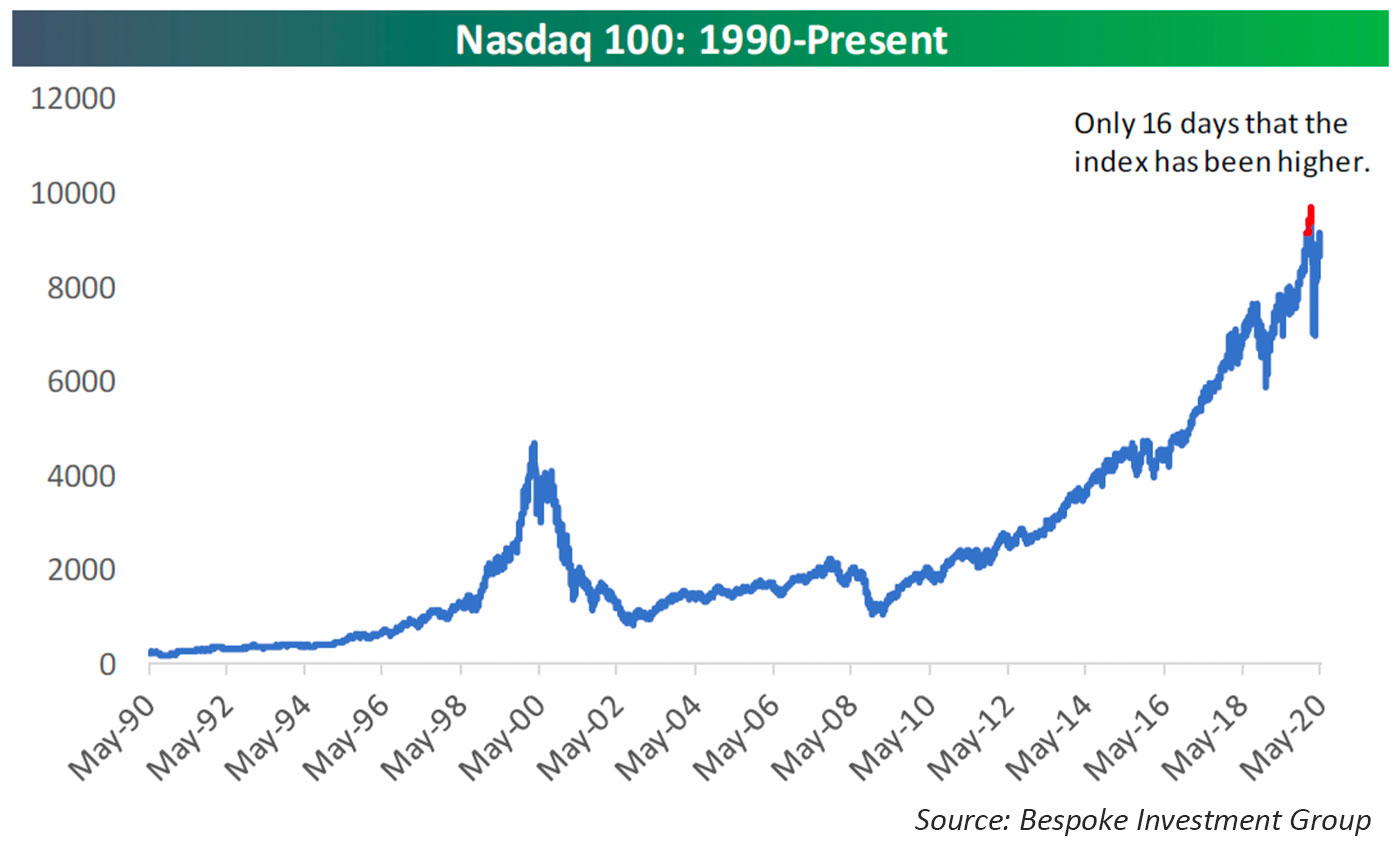 The week ended with back-to-back daily gains on Thursday (May 7) and Friday (May 8). This left the S&P down 13% from its high on February 19 and the NASDAQ 100 just 5% below its high-water mark.

Of course, the quick pickup in stocks has left both indexes overbought. Eighty-three percent of S&P 500 industry groups are now above their 50-day moving average. This is remarkable considering that 0% of these groups were above the mark for four straight weeks in April. At the same time, most of these moving averages (91.7%) remain in a downtrend.

Economic reports remain grossly negative (although many are still not as bad as economist predictions). The standout last week was the employment report. It showed that April was the worst month in history for job losses in a single month. Furthermore, the 14.7% unemployment rate represents the highest level since the Great Depression of the 1930s. In other words, it also topped the worst unemployment rate of the 2008 Great Recession!

Still, almost all of the unemployed were classified as “temporary,” which suggests they could quickly be recalled as the economy reopens. Additionally, it may be worth noting that the highest level of unemployment recorded in the Great Depression was 25.5% and occurred in August 1932. Between early July of that year and early September, the S&P 500 gained over 100%.

We are nearing the end of earnings-reporting season for the first quarter of the year. As we suggested would likely happen before the reporting began, more firms are beating their estimates than are not. Sixty-one percent have beaten both earnings estimates and revenue projections. Both are above-average readings, and this has historically been positive for stocks.

Different types of investors have responded differently to the current crisis. The Yale School of Management’s crash survey shows that most institutional investors do not expect another stock market crash within the next six months, while most individual investors do expect one to occur again within that time.

This latter sentiment is confirmed by a review of the latest American Association of Individual Investors report. It shows that more than 50% are bearish and less than 25% are bullish. Sentiment conditions are normally viewed in a contrarian manner. Both of these reports suggest a strong probability (over 65% chance) of future gains for stocks.

Most price patterns have continued to turn more negative in the short run (up to three months). The short-term trend indicators we monitor remain positive, while our very short-term-oriented QFC S&P Pattern Recognition strategy’s equity exposure on Monday’s (May 11) close switched from a positive 80% invested to a near-zero (0.8%) reading.

Similarly, our intermediate-term tactical strategies remain mixed: The Volatility Adjusted NASDAQ strategy (VAN) is mired in inverse funds with a negative 40% exposure to the NASDAQ, the Systematic Advantage (SA) strategy is 105% exposed to equities, our Classic strategy is in a fully invested position, and our Self-adjusting Trend Following strategy (STF) is back to 100% invested. VAN, SA, and STF can all employ leverage—hence the investment positions may at times be more than 100%.

Among the Flexible Plan Market Regime indicators, our Growth and Inflation measure shows that we are now in a Deflation economic environment stage (meaning a negative monthly change in the inflation rate and negative monthly GDP reading). Deflation is the worst regime stage for stocks and the only stage that is slightly negative for gold. Bonds seem to do the best in this stage. Since 1972, the economy has been in a Deflation stage only 3% of the time. Given the unusual impact of the virus on the economy, history may be less of a guide this time. We shall see.

All the best, and wishing you health and safety in these trying times,