The media is under attack from many sources today. We hear the cries of “bias” and “fake news” not only daily but many times throughout the day.

While most of the focus has been on the political world and the influence on internet websites such as Google and social media platforms such as Facebook and Twitter, the financial media deserve some attention as well.

I do not mean to imply that the financial media—TV, internet, and print—are fake, biased, or even misleading. Rather, I think they do a great job of conveying the business news very professionally. In this regard, they are a standout in what is increasingly becoming a journalistic wasteland.

However, how we make use of the information from the financial press is my primary concern. Much of what I’m going to relate comes from an excellent presentation made by Jay Mooreland at the Schwab Impact Conference that I attended a week ago. Jay created the Behavioral Finance Network that offers coaching for advisers.

The financial media primarily has a profit motive

Jay’s discussion of the media starts with a simple question: What is the primary role of the financial media?

If you answered, “To sell ads and make money,” you just earned a gold star in behavioral finance. If you said, “To provide solutions to my own investment needs,” you get the buzzer.

To make money selling ads means getting eyeballs to watch the programming. To do that, Jay says, media outlets create a casino-like atmosphere. The news is reported in a sensational manner, and the emphasis is on extreme behavior that always suggests action.

The focus is often on prices—how they are changing minute by minute, second by second. There is a dramatic countdown to the market opening and another at the close.

And there is always an effort to create an overwhelming sense of urgency for action. Emotions are constantly in play. Fear of loss is exploited, as is the fear of missing out.

This is not done to help you solve your investment needs. This is done to secure ratings, which, in turn, generate ad dollars and bottom-line profits.

As I have written in the past, these stirred-up emotions work against investors’ best interests. They lead investors down a path to underperformance and sometimes ruin.

Trying to manage investments based on news events and the reports of random price changes is a losing battle.

The financial media can feed impatience and emotional investing

DALBAR, the premier, independent investment-performance-rating firm, recently published its 2019 Quantitative Analysis of Investor Behavior report. One of its findings is that, for the 20-year period ending December 31, 2018, investors earned an average annual return of 3.88%. Since inflation amounted to 2.17% per year during the period, that left an average annual return of just 1.71%.

Using conventional asset allocation did not improve results, but instead made them worse: The net real return dropped to a negative 0.3% with the average asset-allocation fund investor making only 1.87% per year before inflation in the 20-year study period!

In addition to the investment return results, the DALBAR study looks at why the investors performed so badly. While a lack of sufficient capital was often cited, fully 50% of the reasons why investors did badly were because of psychological factors—primarily a lack of patience in sticking with their strategy through the emotional roller coaster of a complete market cycle. 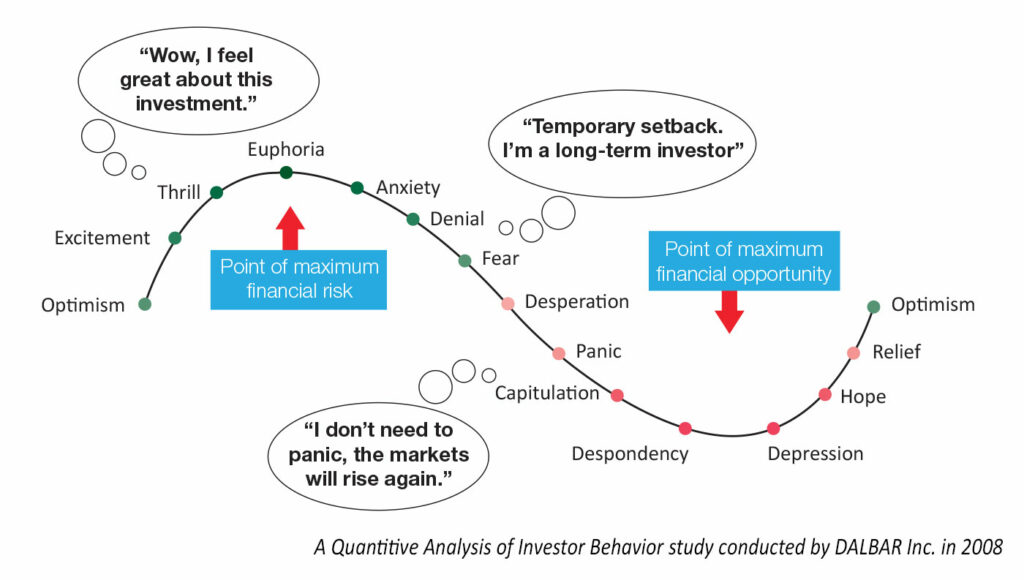 Because this cycle repeats over and over, most investors easily lose patience with their investments. According to the 2017 DALBAR study, the average investor retains an investment for about three years. I know here at Flexible Plan that the period of maximum risk for losing a client is in the first two to three years, which I think confirms the DALBAR findings.

This lack of patience and emotional investing is fed in large part by the financial media. In addition to the short-term, sensational focus of the media, their use of indexes as benchmarks creates false expectations.

Indexes are artificial. They are not realistic. They have no fees for their execution and maintenance, while every mutual fund, ETF, and separately managed account includes some added expense.

When comparing investments to the indexes, the focus is only on returns. We know how much the S&P 500, for example, goes up and down each day or week, but the cumulative losses experienced investing in the index is never discussed.

We know that the S&P reduced a $100,000 investment to less than $50,000 not once but twice in the last 20 years. No one would recommend that an investor actually invest their whole portfolio in such an investment. Yet the media would have consumers compare their investment returns to that index’s performance.

This is especially egregious with respect to risk-managed investments. These investments need to be responsive and exercise risk avoidance. They hedge their equity investments with investments in other assets that have very different return streams and risk profiles. They are not in any sense comparable to a passive, 100% equity index.

So what can an investor do?

Decreasing your exposure to financial media would be a good start. Why stress over news headlines? Why risk it causing you to overreact and abandon a strategy that has proven successful over the long term because of some stirred-up short-term emotion?

And, after all, isn’t the investment strategist already doing these things for you? Isn’t it already built into the strategy you are paying for?

In the end, you have to ask yourself “Why do you tune in?” The only good answer is “To stay informed.” But “informed” of what? If you are getting only short-term, random price movements and sensational headlines, how does being informed of that help or hurt you when it comes to sticking with your investment strategy?

When you and your adviser chose your present strategies, you did so after three actions took place:

In other words, you entered into your present investments based on your consideration of the long term, both in terms of past results and future needs. It was not based on the short-term attention span most of the financial media cater to by necessity.

The financial media do provide information. And, at any given time, the content they provide can certainly seem like the best show in town.

But, as investors, don’t we want to top the mediocre performance found in the DALBAR studies? If so, we need to ignore the media’s short-term focus and stick with the portfolios deliberately crafted for us for the long run by financial professionals.

After all, financial advisers serve themselves best by best serving their clients’ investment needs. In contrast, media outlets are ultimately on a simple quest for your eyeballs and more ad revenue. 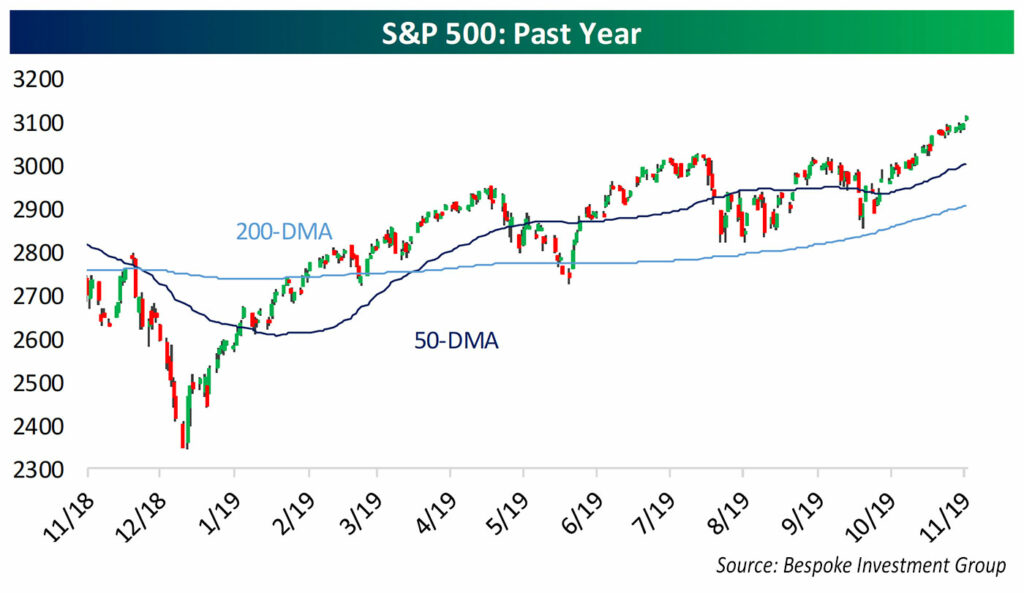 Price momentum has been moving stocks higher here in the U.S., and it is encouraging that our gains have been, in many cases, outdone by foreign exchanges. Still, the ongoing rally of broad global equities has taken stocks into overbought regions.

In fact, as is the case here in the U.S., the move higher has placed us in the lower fringe of extreme overbought territory in many countries. While this is not as concerning longer term, it may lead to a decline or consolidation in the next week or so.

Still, with Monday’s close higher, the S&P 500 has experienced eight new all-time highs just since the start of November. Year to date, there have now been 23 of these days to celebrate!

Economic reports continue to be weaker than expected. Last week, 12 of 25 reports failed to match economist projections, while 10 exceeded.

Inflation reports were slightly positive with the number of reports for weakening inflation exceeding those that pointed higher. Headline numbers for the consumer price index (CPI) and producer price index (PPI) were up, but core inflation readings, as well as export and import costs, pointed lower. This is supportive of the Federal Reserve’s efforts to lower rates and stimulate the economy.

The third-quarter earnings-reporting season drew to a close last week. The final numbers showed that while year-over-year results were down slightly, 64.8% of the reports beat analyst expectations, the best in the last five quarters. Revenues were not as positive. Only 57.9% of the top-line numbers came in higher than expected, similar to the previous four quarters.

Short-term indicators are more positive than not, and while most price patterns a week ago were sending positive signals, the latest batch suggests some negativity and volatility for next week. The QFC S&P Pattern Recognition strategy remains in cash and bonds.

Among the Flexible Plan Market Regime indicators, our Growth and Inflation measure continues to show that we are in a Normal economic environment (meaning a positive inflation rate and positive GDP). Our Volatility composite (gold, bond, and stock market) is still in a Low and Falling state, which favors stocks and then gold over bonds—although all have positive returns in this regime stage. Gold has the largest historical drawdown of the three, resulting in the lowest risk-adjusted return.

Volatility has been decreasing in the stock market for some time now. Monday (11/18) was the 26th day in a row without a 1% gain or loss. And the VIX, or fear index, recently made a new low for the last six months. This can be viewed as a sign of complacency and has often preceded consolidations or declining periods in the past. 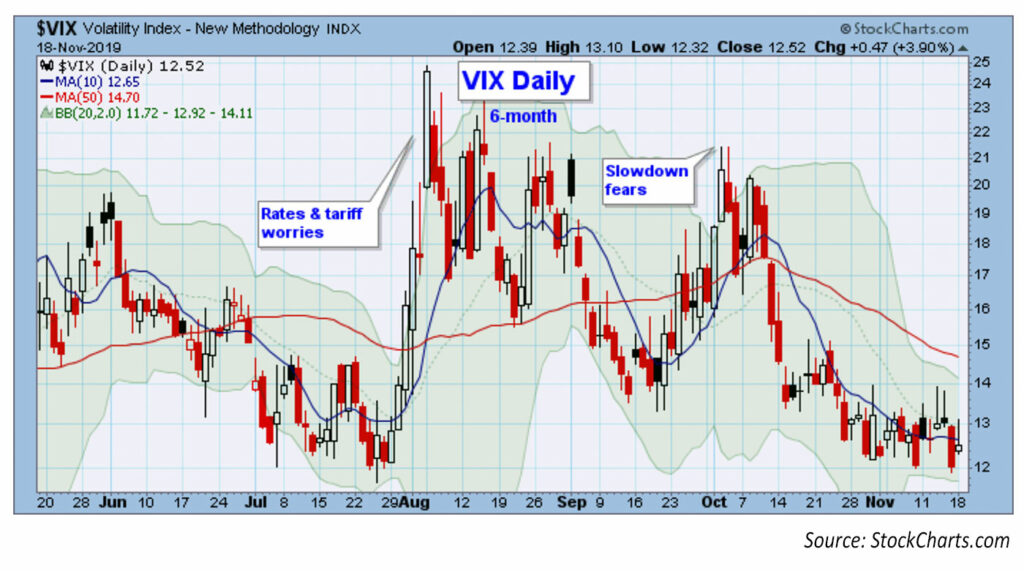