“The reports of my death have been greatly exaggerated.”

Like on the set of a Quentin Tarantino movie, the bodies are piling up in the financial-services industry. Few days go by when we do not see yet another obituary posted.

The dead and dying include many past industry luminaries:

The list goes on and on. The deaths of each have been prominently published, public mourning has commenced, and the eulogies have been delivered.

And just as mystery author James Patterson has often written, there is a murderer among us.

It’s the one that no one would have guessed. The nice one, the one that only gets the good press, luring victims with happy talk and a smiling face.

Fortunately, there have been a host of telltales to unmask a suspect. But the number one clue has been the common link among all of the victims: Each fatality has had the same occupation. Each was a risk manager.

And each of these deaths has been the work of just one assailant: a rampaging bull, whose murderous market romp has lasted over 10 years and is still with us. It alone appears to have done them all in.

Each death was accomplished with a purpose. The murderer knew that each victim had become superfluous and could now be eliminated.

Who needs risk management when the financial markets do nothing but move higher? Sure, there’s a pause or two, some price choppiness, and even some minor corrections. But, in the end, there is another new high to celebrate … and an added nail in another coffin of a risk-management strategy.

Yet haven’t we seen this movie before? During the dot-com bubble, stocks rallied for 10 years (1990–2000). Obits were published; risk management was not needed in the new tech economy. Yet the next 10 years saw not one but two collapses in stock market prices. Both times fortunes were cut by more than half.

Ironically, after 10 years of murderous assaults by the bears (2000–2009), eulogies for buy-and-hold investing were then being voiced instead.

It seems like this movie is going to finish like so many mysteries, with the oft-told ending where we learn that the protagonist isn’t really dead.

After all, the buy-and-hold strategy has resurfaced. It has climbed out of the grave dug in the first decade of this century to reign supreme in the second.

Active management was seemingly brought back to life as well after it was left for dead during the dot-com rally. As such management has been with us since investing began, isn’t it likely to be resuscitated once again?

It is extremely difficult for investors to stick with a strategy, no matter what it is. Passive buy-and-hold and active management strategies are no different in this regard.

Right now, the challenging position to hold true to is the active side. Yet, isn’t this the same for the buy-and-hold investor when the market is declining? Both sides will agree that history is on the side of the investor that sticks with a time-tested strategy.

In this period, when new stock market highs are being made, make sure you are holding a variety of active strategies. Having a core strategy, like our dynamic Multi-Strategy Core, is essential: It is designed to help you keep up with a passive, diversified portfolio when risk is not apparent.

This is no different from the diversification of a passive portfolio that is holding international, value, small-cap, and commodity investments. They are not included in the portfolio to perform well in this market but are there for an unpredictable future market.

As a risk-managed investor, one can’t compare strategies to a passive index such as the S&P 500 when the market is in a prolonged rally. It’s just like comparing a driver who keeps his or her foot only on the accelerator to another who uses the brake as well. The first driver will do great on the straightaways but will probably have difficulties when a turn is encountered.

Realize that investors in a passive, diversified portfolio also struggle with this same dilemma. They, too, will lag all of the passive stock market indexes during a rally. Investors can’t diversify among assets and still outperform the top performer of those assets.

So, if the two investors—one dynamically risk managed and the other passively diversified—have to deal with many of the same problems, why choose to have dynamically risk-managed investments versus the popular passive variety? There are at least two ways to approach answering this question.

These are not surprising facts. The true revelation can be found in the historical finding that missing both the best and the worst does better than buying and holding. Why? It is because the mathematics of a decline are so demanding. 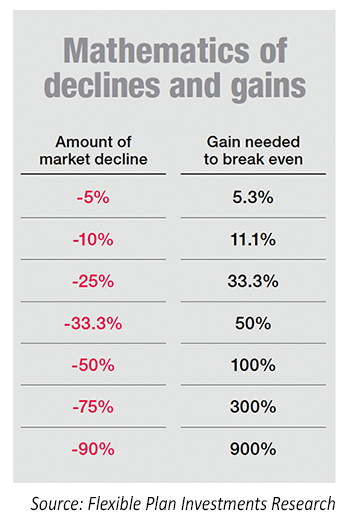 Market history tells us that protecting against market declines is more important than capturing all of a market rally. It is simple mathematics. If you lose 50% of your investment, it takes a 100% gain to get back to breakeven. This is even more painful if you have accumulated gains in a rally and then lose them all and more in a crash. A 100% gain becomes a breakeven investment after a 50% loss.

The second is a nod to a passively allocated portfolio: Realize that this, too, is simply a strategy. It works … some of the time. If it is also a strategy, then why not include it in a portfolio of strategies? Or, inversely, why not combine dynamically risk-managed strategies with your passively allocated strategy? It will better prepare you for whatever market environment we happen to be in.

Unless the business cycle ceases to exist and the human emotions of fear and greed disappear, the current market environment will change. “Buy and hold” will suddenly be out of favor, and active management will be the answer.

All of the risk-management strategies that have been declared dead and buried will have their time in the sun once more. Rallies begin in the debris of the last market collapse, and rallies end in exhaustion and emotional excess. From that exuberance, the next downturn will inevitably begin. It’s a cycle, and we must prepare for both halves of that cycle.

When the present cycle ends, we will realize that all of these risk-management strategies are not dead. History has taught us that when many think that the bear is dead, it is not. It is actually just hibernating.

The stock market has managed to break out of the sideways consolidation period that held it captive throughout the summer. The breakout has been confirmed by all of the major indexes and most of the minor stock indexes as well. This usually means higher prices are yet to come. The cumulative advance-decline line, which originally suggested a new high in stocks, continues to reach new heights. 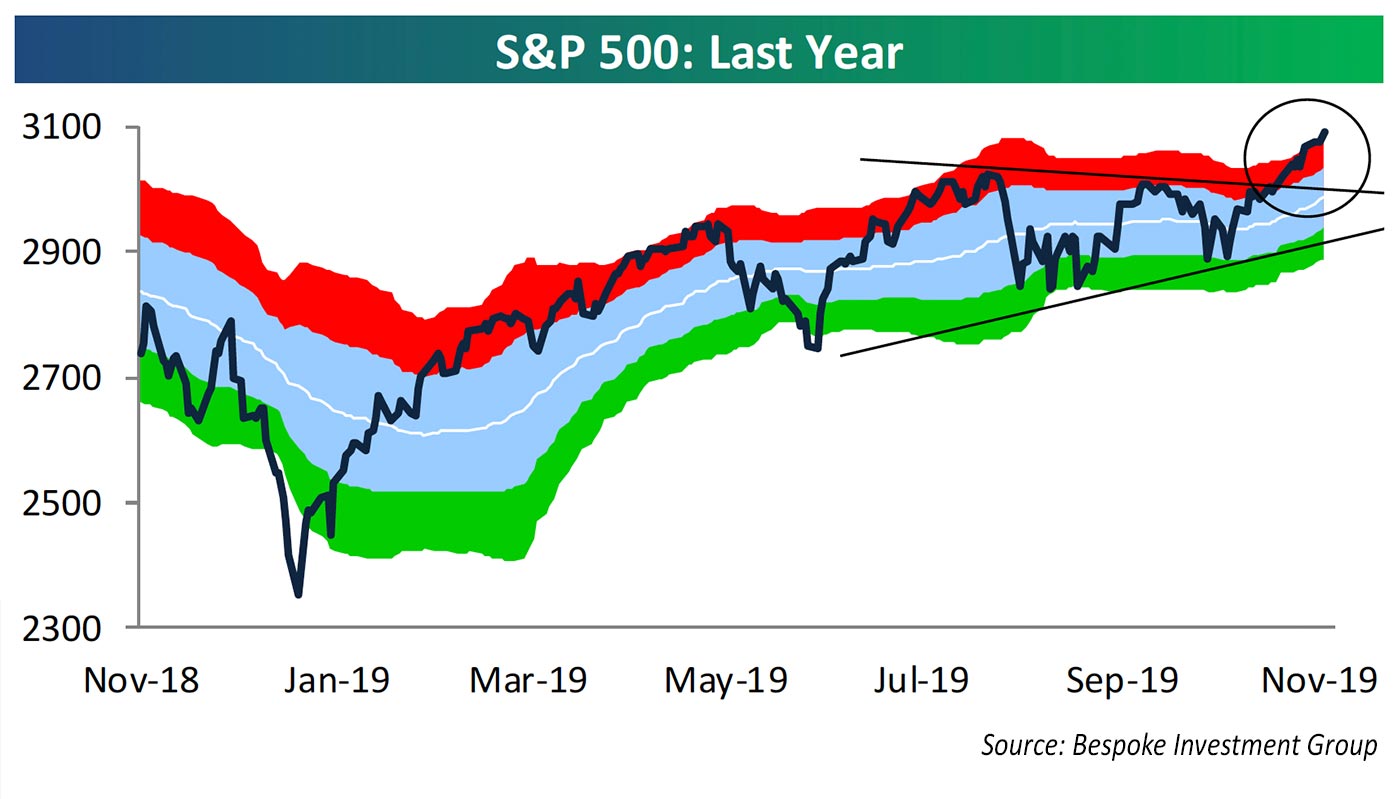 The two flies in the ointment now are (1) in its rush higher, the market has moved into extremely overbought territory and (2) the number of issues trading above their 50-day moving average has hit a new high that remains below its last new high. These are signs that have often led to short-term weakness.

It’s a mixed bag among economic indicators. While the Citi Economic Surprise Index (a measure of how economic data compares to market economists’ forecasts) for the U.S. is still positive and rising, last week economic reports disappointed. Of 20 reports, 16 were below the estimates of economists. This is similar to another weekly period from last month.

Manufacturing and productivity were down. Inflation indicators (of which there will be more this week) were mixed. Unit labor costs are rising, but the generally positive ISM non-manufacturing report shows lower prices for most commodities.

Federal Reserve Chairman Powell provided positive commentary overall when he recently announced the Fed’s decision to lower rates for the third time this year. He stated that he did not believe an increase in rates was likely “in the foreseeable future.” This was viewed very positively by stock market investors, and, historically, the third reduction in rates has generally led to higher stock prices.

Still, as we have seen in the immediate past, the bond market can demonstrate a very independent mind of its own. As a result, yields jumped and bond prices have tumbled.

One bit of fallout from the rise in government bond rates is that a factor generally supportive of higher stock prices has been eliminated. As we have reported this year, the dividend yield of the S&P 500 has been greater than the yield of the 10-year government bond. With the jump in yields last week, that is no longer the case. This removes one underpinning of the bullish case for stocks. 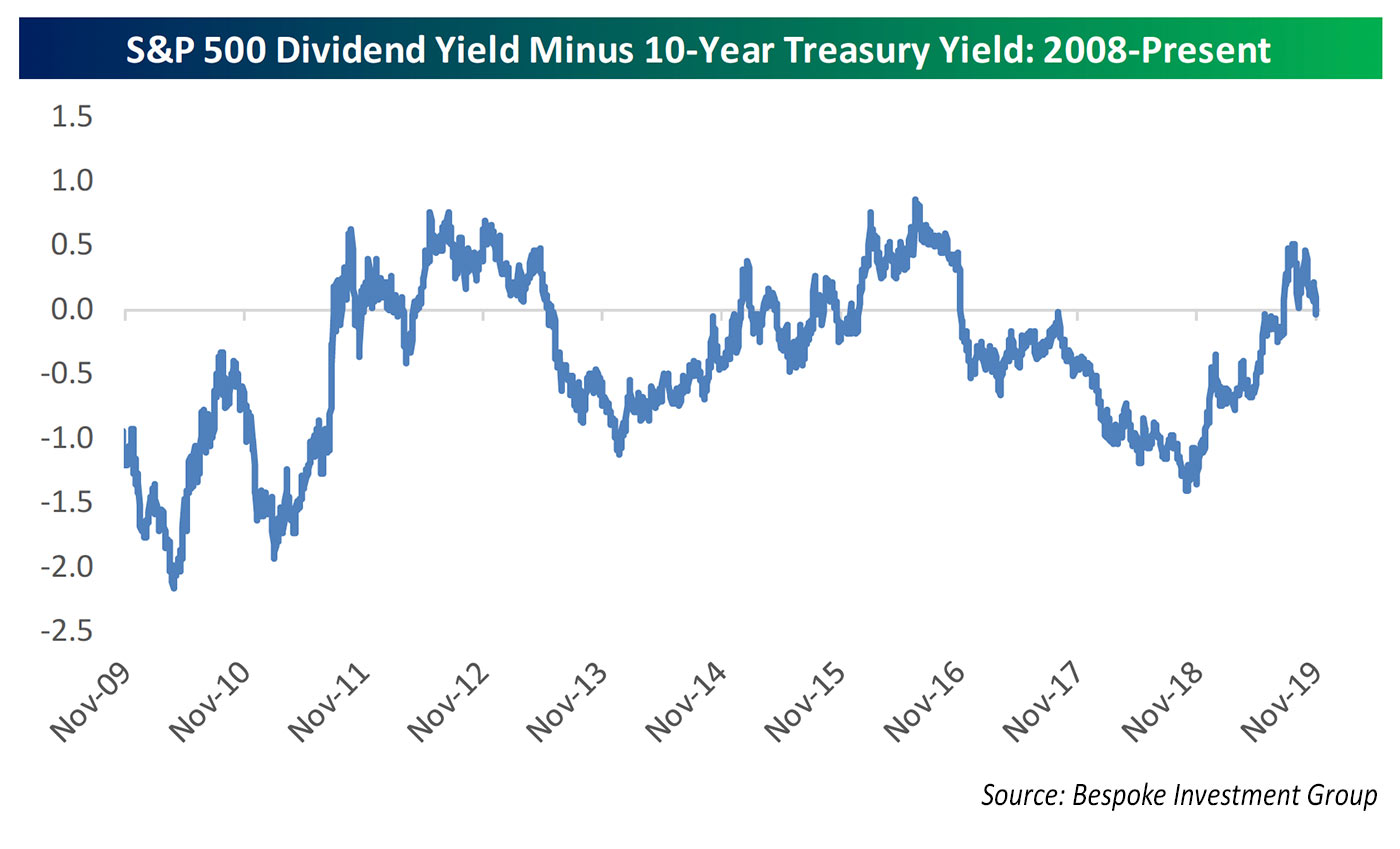 Counterbalancing this has been a very good earnings reporting season so far. While it still appears that earnings will slide about 1% below their level a year ago, they have been substantially outperforming analyst expectations. Currently, 65.2% of reporting companies have outperformed, and that is a better rate than those posted in each of the last four quarters.

FPI intermediate-term tactical strategies are in a mixed state: The Volatility Adjusted NASDAQ strategy has increased its investment position to 200%, Classic remains fully invested, and our Self-adjusting Trend Following strategy remains at 200% invested.

Short-term indicators are uniformly positive, and while most price patterns a week ago were sending positive signals, the latest batch suggests some negativity and volatility for the next two weeks. The QFC S&P Pattern Recognition strategy remains in cash and bonds but is close to a trade.

Among the Flexible Plan Market Regime indicators, our Growth and Inflation measure continues to show that we are in a Normal economic environment (meaning a positive inflation rate and positive GDP). Our Volatility composite (gold, bond, and stock market) has switched to a Low and Falling reading, which favors stocks and then gold over bonds—although all have positive returns in this regime stage. Gold has the largest historical drawdown of the three, resulting in the lowest risk-adjusted return.