As I reported last week, the Thanksgiving to New Year Santa Claus rally is following its normal path. This is easy to see in the graph below of price tracks from the past 30 years. This year’s rally is shown in red and seems to be right in the middle of past performances. 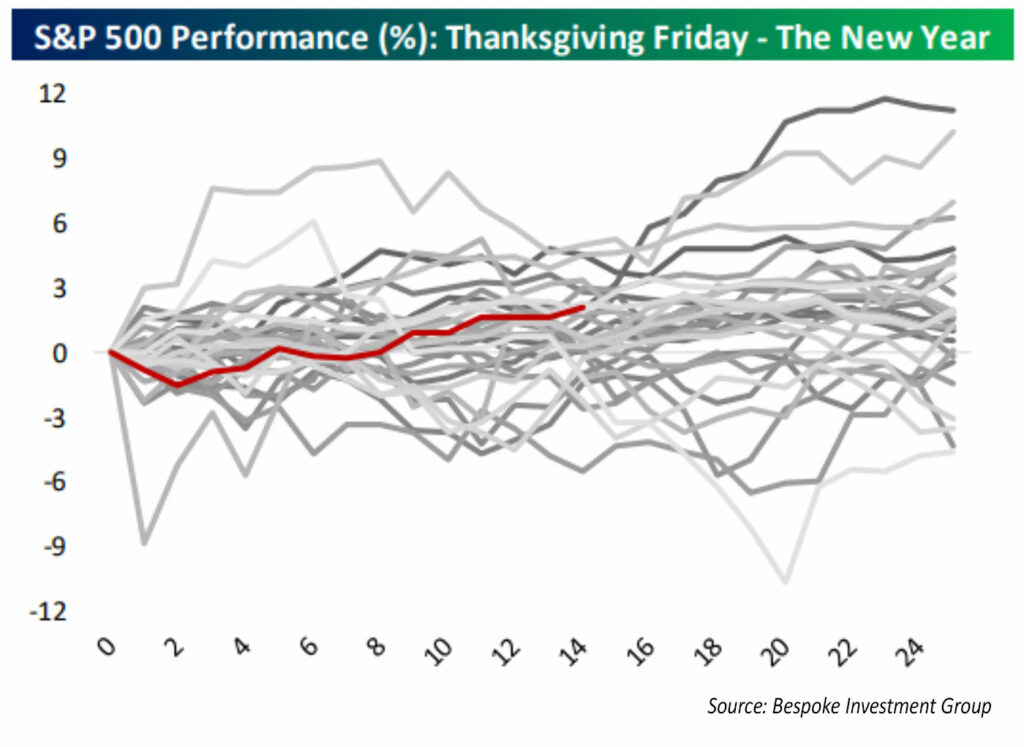 During this time period, the S&P 500 has continued to register new all-time highs. It has hit those marks at the close in six of the last seven sessions. This year we have seen over 30 record closes and the seventh highest number of positive closes in stock market history, with 58.8% of the market sessions closing higher.

The positive activity on Wall Street has not gone unnoticed. Sentiment from both newsletter writers and small investors has turned quite bullish. Unfortunately, these are contrary indicators and may be signaling the likelihood of some underperformance in the new year.

Volatility measured by the VIX, the so-called fear index, is very low. As such, it is supportive of investors’ bullish views. However, it is showing some signs of bottoming and an upturn could squelch the current rally.

With the House still trying to impeach the President, other news from Washington was certainly supportive of the higher stock prices. Congress came together to provide bi-partisan support for the President’s United States—Mexico—Canada Agreement and a spending bill to avert another government shutdown. In addition, the President was able to announce a “Phase One” trade agreement with China that upon examination appears even more beneficial than many originally thought.

Economic reports, however, arrived in offsetting pairs this week. While the final reading on third quarter GDP showed economic growth improving, manufacturing reports, including the PMI and the Philadelphia Fed’s Manufacturing Outlook survey, were weak. And Existing-Home Sales were off a bit in select areas of the country.

With these countervailing reports, it is surprising that economic sentiment of the public, as described in Bespoke’s Composite Economic Sentiment Index, is generating quite high readings. However, they have been stalled for some time as it is difficult to move higher from these levels. While a downturn in these readings would certainly discourage investors, as it did earlier in the year, the present conditions have been supportive of higher stock prices in the past. 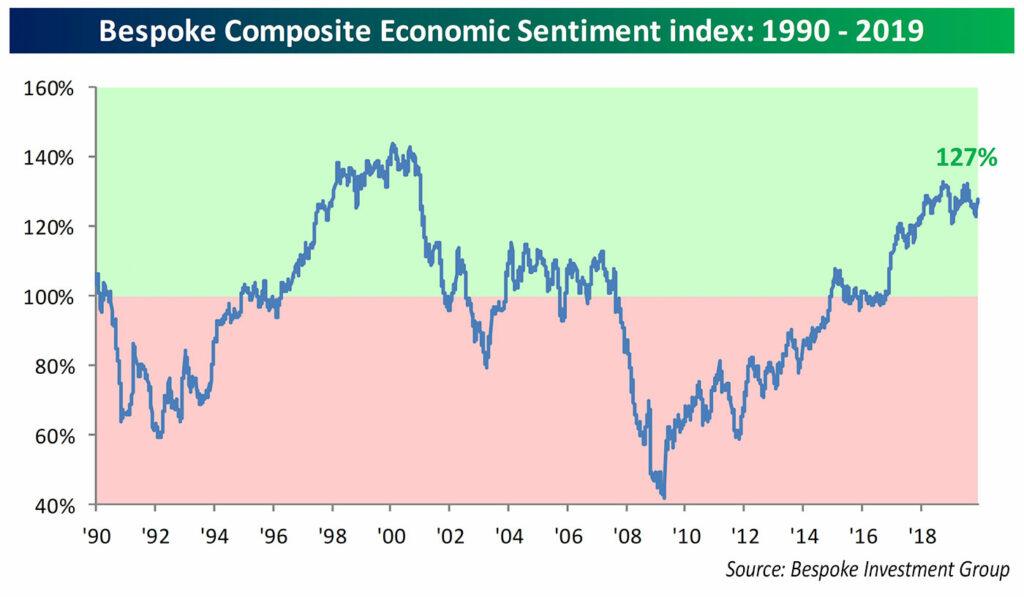 These positive levels seem to be sending interest rates higher despite Fed Chairman Powell’s statement last week that “both the economy and monetary policy right now are in a good place.” The market seems to be contradicting the Fed’s stated policy of leaving interest rates alone for a while. This could put some pressure on bond investor portfolios at least in the near term.

While the present state of interest rates could be bad news for bond investors, they present a mixed picture for stock traders. Shorter maturity bonds are at levels suggestive of some stock weakness in the short term, while longer-term bonds of the 7- to 30-year variety are at levels that have led to higher stock prices throughout the next year. 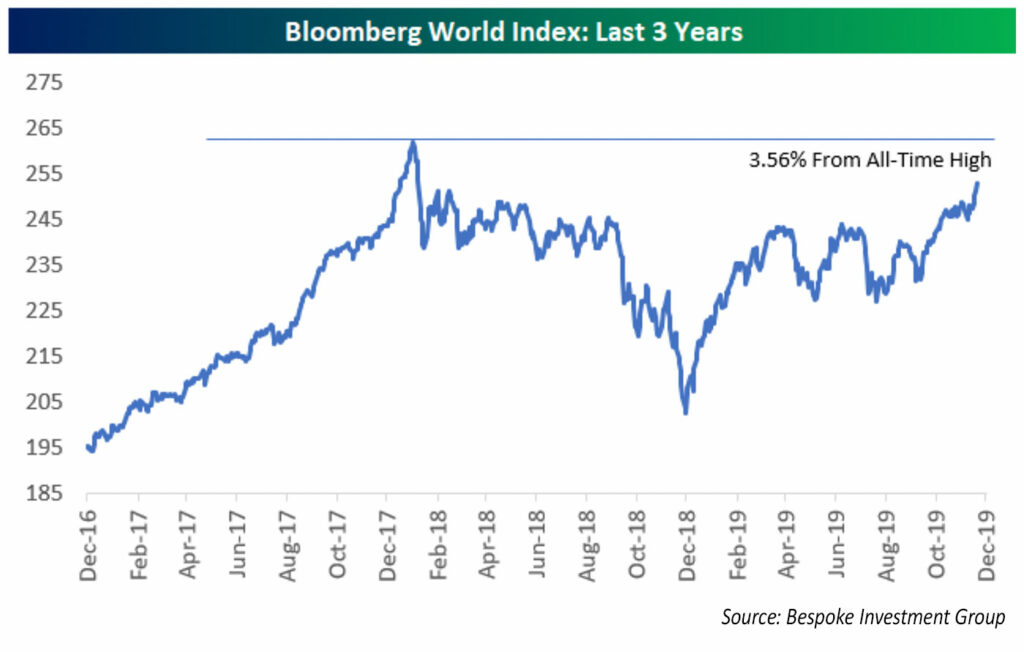 World stock prices are approaching a break out of their own. It seems that lately the gains registered outside of the U.S. have started to match or exceed those in the U.S. Many stock experts are again recommending investments in these foreign markets to diversify portfolios.

In the past, these moves have been premature. This suggests that a good way to accomplish this diversification may be with an active global strategy that can rotate between U.S. and foreign investments. To that end, we have our Global Select strategy, available to both mutual fund, VA, and ETF investors. Also available in the international sphere are Evolution Emerging Markets and Global Maturities.

As I have been pointing out, our Political Seasonality Index (PSI) suggested a mid-December swoon ending on December 14 this year. With that behind us, we now are in the usual Santa Claus rally period, which is slated to provide a positive underpinning to the market into the new year. With the coming of 2020, we will be leaving behind the third year of the four-year presidential cycle. While this is the best year for stocks in the cycle, it’s worth noting that an election year is the second best!

(Our Political Seasonality Index is available post-login in our Solution Selector under the Domestic Tactical Equity category. The political seasonality strategy has been our best performer over the last five years and has topped the S&P 500 Index in return over the last two years while being in the market only a fraction of the time. It is now available as a QFC strategy, meaning that there is little or no FPI advisory fee for the strategy to be billed to you beyond your financial adviser’s regular fee.)

Short-term indicators are maintaining their uniformly positive posture. Our QFC S&P Pattern Recognition strategy’s equity exposure has, however, been reduced to 0.

Among the Flexible Plan Market Regime indicators, our Growth and Inflation measure continues to show that we are in a Normal economic environment (meaning a positive inflation rate and positive GDP). Our Volatility composite (gold, bond, and stock market) is showing a Low and Rising reading, which favors gold and then stocks over bonds—although all have positive returns in this regime stage. During this regime, which historically occurs about 27% of the time, Gold has the largest historical drawdown of the three, just edging out stocks.

I continue to believe that although a minor downturn may occur at any time, most evidence supports a rally through the remainder of the year.

All of us here at Flexible Plan Investments, Ltd., wish you a Merry Christmas, happy holidays, and a healthy and prosperous New Year!