Running out of somedays

When I was still a teenager, I began a bad habit. While thinking about the future, I would always reference “someday.”

I say it was a bad habit because I had a tendency to procrastinate. The dreams of someday let me put off until tomorrow many goals that I may have been able to attain earlier in life.

Regardless, as the years went by, I managed to reach my somedays most of the time. Some were easily grasped. Others took a very long time, and often the aid of others, to achieve.

And while you may have a few somedays remaining on life’s shelf as you get older (and even add a couple of new ones), you realize that the number of somedays diminishes as time goes on and that some of the remaining ones are unobtainable. You’re running out of somedays.

When it comes to investing, waiting for someday could cost you

Certainly, it feels like we are running out of somedays in the financial markets lately. Stocks are currently in the 11th year of a rally. By some measures, it’s the longest stock market rally of all time. 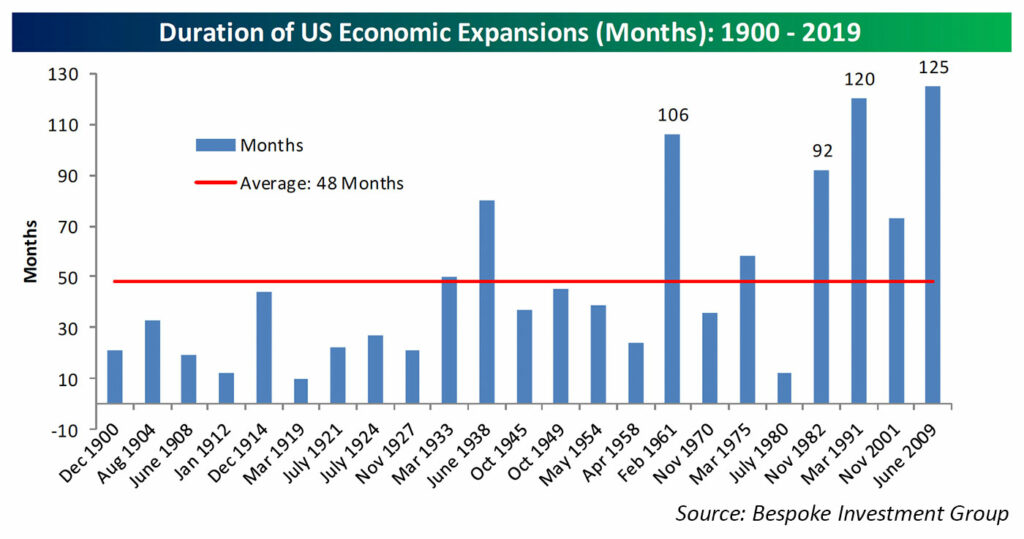 Bonds have been in a rally mode for over 30 years. Only during the last two years has the bond rally seemed to have been drawing to a close.

Someday these rallies are going to end. Someday stocks are going to crash. Someday bond yields will start to rise again, inflation will “inflate,” and bond investors will have to deal with a crash of their own.

When will these somedays occur? No one knows for certain.

Back in 1981, when I started Flexible Plan Investments, Ltd., even if you knew when the someday was going to come, there was not much the average investor could do about it. The only strategy anyone was talking about was buy-and-hold investing.

With buy-and-hold investing, you have to hope that you have the will power to ride out any decline—even in the face of a loss of 50% to 75% of the value of your investments. Those whose will power falls short are usually doomed to sell at the bottom and then wait out years of a subsequent rally before getting up the courage to invest once again.

With the spread of passive asset-allocation portfolios, many investors thought they had discovered the answer to this dilemma. If they simply diversified their investments into a number of asset classes, they could reduce the losses and avoid the temptation to sell at the worst possible time.

At the same time, our investors were using a different method to limit losses—dynamic, risk management. By being responsive to the market actions, rather than passive, we were able to make money or avoid most of the losses in 1987 and 2000–2002 and substantially mitigate them during 2007–2008.

I know I am preaching to the choir when I write this message to our clients. But for those that only use us for a small portion of their investments or those reading this article in its wider distribution, I have to ask, “Are you concerned that someday you may lose the gains you have achieved during the last decade, whether they be in stocks or bonds?”

At Flexible Plan, we now have turnkey, dynamic, multi-strategy core portfolios that can replace or share the core responsibilities of the old-school passive core that you may be employing. They are designed to meet your suitability needs from conservative to aggressive. And because they are Quantified Fee Credit (QFC) strategies, there is little or no FPI advisory fee to be billed (after the application of fee credits) beyond your financial adviser’s regular fee.

Most importantly, our Multi-Strategy Core and Fusion 2.0 turnkey strategies can deploy a wide array of defensive methodologies to handle the “grizzly bear” markets that will be here someday. While each is diversified, they don’t depend only on diversification to protect your investments. They are designed to move to cash, bonds, hedging, and gold at the right time to help preserve your investments.

If you have been planning to take protective action against the coming bear markets in stocks and bonds someday but don’t want to abandon markets that are providing gains today (whether too soon or too late), don’t procrastinate. Activate your core and add one of our turnkey, QFC multi-strategy options to your portfolio. Investing at least half of your portfolio in one of these strategies today could make for big savings someday.

Don’t run out of somedays by waiting to take action to protect your investments.

For the quarter through last week, stocks have a better than 5% return while bonds and gold are down slightly.

Last week had a split personality. The evil personality was evident early in the week, while the good identity was on full display as the week ended. Both economic and stock market returns mirrored these personas throughout the week.

The early part of the week saw more Institute of Supply Management (ISM) underperformance. On Monday (December 2), the ISM manufacturing report was lower than the previous month and estimates. At 48.1%, it marked the fourth consecutive month of contraction in the manufacturing sector. The ISM service report on Wednesday suggested that the service sector was still expanding but at a lower rate than expected.

In response, the market dropped on Monday and Tuesday and barely registered a gain on Wednesday. In contrast, a surprisingly positive employment report and stellar University of Michigan Consumer Confidence report later in the week sent stocks soaring enough for the S&P 500 to make up for early week losses and post a small gain for the week. Gold and bonds declined, however. 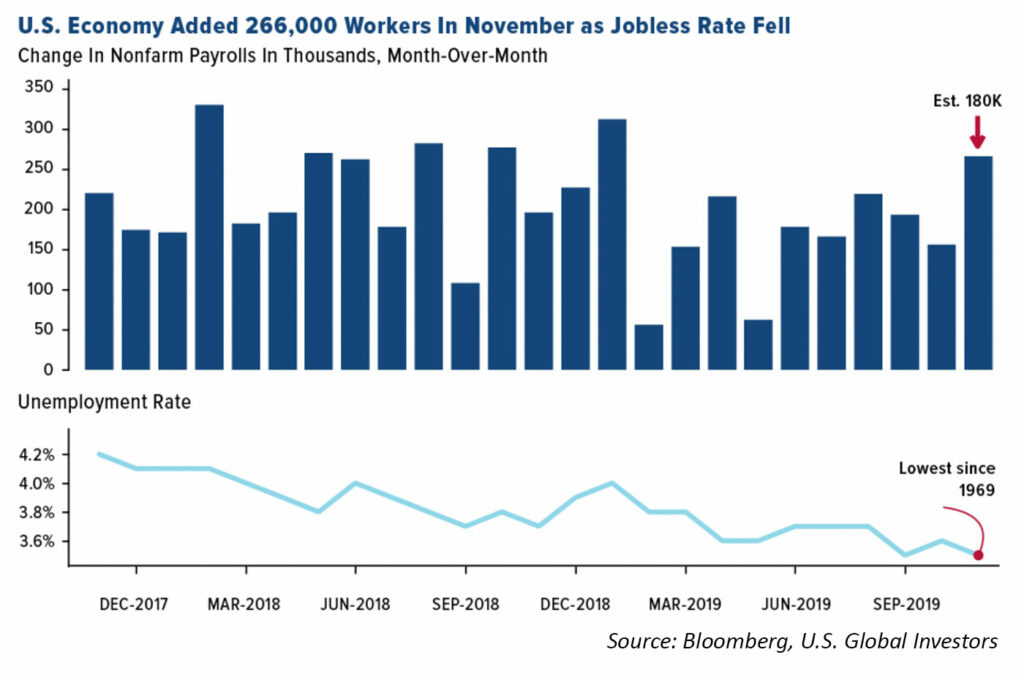 A number of important releases are scheduled for this week. Normally, all eyes would be on the Federal Reserve meeting on Wednesday (December 11). But because the Fed is expected to keep rates unchanged, the market gaze will likely fall elsewhere. Reports each day from Wednesday through Friday on various inflation measures, as well as a retail sales report on Friday, all have the ability to push the market in one direction or the other.

As I have been pointing out, our Political Seasonality Index (PSI) is currently suggesting a mid-December swoon ending December 14 this year. The usual Santa Claus rally is slated to begin the next day and continue to provide a positive undercurrent to stocks through the end of the year. Unfortunately, the announcement of whether additional tariffs will be imposed on China comes on the 15th, which may disrupt the usual seasonal pattern.

(Our Political Seasonality Index is available post-login in our Solution Selector under the Domestic Tactical Equity category. The Political Seasonality strategy has been our best performer over the last five years and has topped the S&P 500 Index in return after maximum fees over the last two years while being in the market only a fraction of the time. It is now available as a QFC strategy, meaning that, after the application of fee credits, there is little or no FPI advisory fee for the strategy to be billed to you beyond your financial adviser’s regular fee.)

FPI intermediate-term tactical strategies are positively situated: While the Volatility Adjusted NASDAQ strategy has backed off its investment position to 80%, Classic continues to be fully invested, and our Self-adjusting Trend Following strategy remains at 200% invested.

Short-term indicators have returned to a positive posture. Our QFC S&P Pattern Recognition strategy’s equity exposure has moved up to 160%.

Stocks survived a test at the 50-day moving average level but then bounced back into moderately overbought territory. The semiconductor index, which often leads the rest of the market, has failed to confirm the recent rally in the S&P 500. This suggests some additional weakness to come. 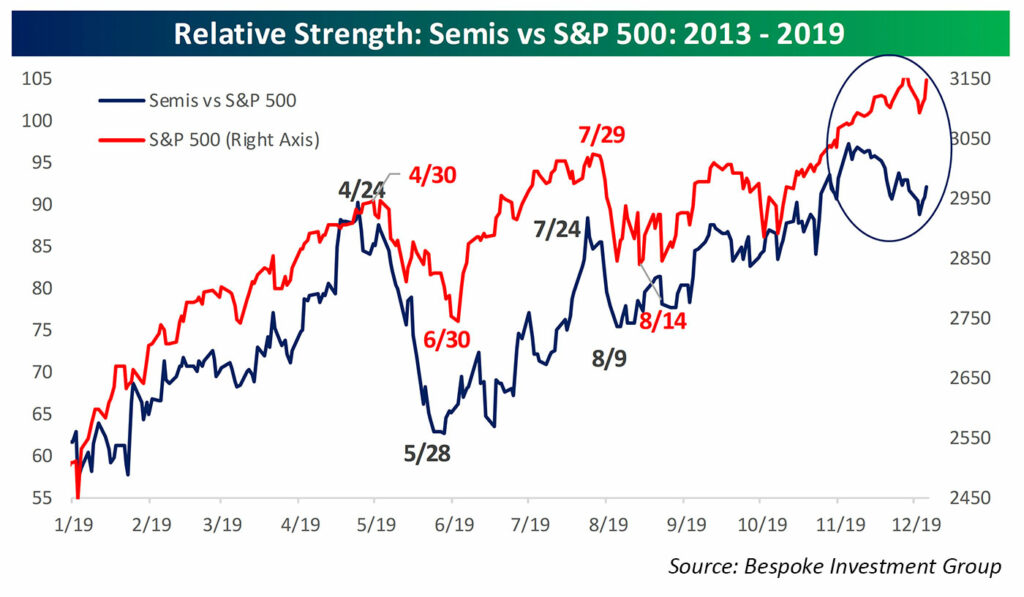 Among the Flexible Plan Market Regime indicators, our Growth and Inflation measure continues to show that we are in a Normal economic environment (meaning a positive inflation rate and positive GDP). Our Volatility composite (gold, bond, and stock market) is showing a Low and Falling reading, which favors stocks and then gold over bonds—although all have positive returns in this regime stage. Gold has the largest historical drawdown of the three, resulting in the lowest risk-adjusted return.

I continue to believe that although a downturn may occur in the remainder of the first half of December, most evidence supports a rally thereafter through the end of the year.