When Everything Seems Positive… 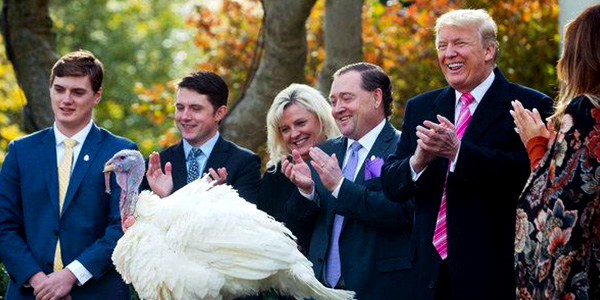 Author's Note
Attached is an update of my annual thanksgiving post, one of my most popular posts. I hope those of you who missed it will enjoy it as much as past readers. If you remember the column, please move on to the Market Update portion for the latest on the financial markets.

This week we will no doubt see photos in the press of President Trump announcing the annual pardoning of a lucky turkey. Unfortunately for most turkeys, but fortunate for most of the rest of us, this Thursday, the fate of the average turkey is not to be pardoned. 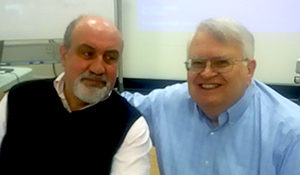 In 2017, at this time of the year, I spent a good part of a week in a very small workshop with Nassim Taleb, author of many of my favorite books on risk (“Fooled by Randomness,” “The Black Swan,” and “Antifragile”). It was an awesome workshop that helped me refocus on the reasons for risk management.

In the latter two books, Nassim describes “The Turkey Problem”:

For a thousand days, the butcher feeds the turkey. With each passing day, as he steadily grows in size, the turkey becomes more convinced of the butcher’s benevolence and the probability of an ever-brighter future. Then the day before Thanksgiving arrives, the turkey gets a surprise. 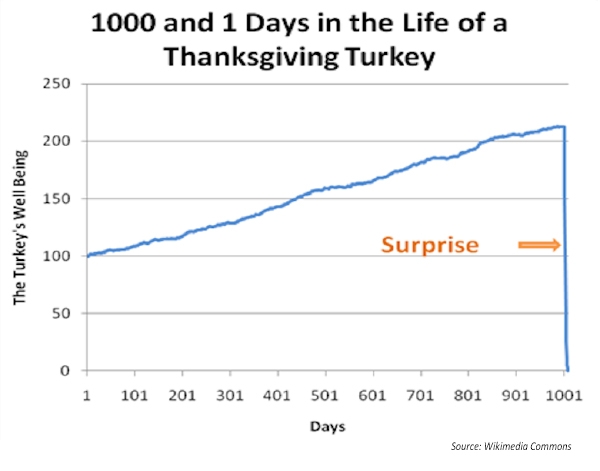 The poor turkey falls prey to an issue that we all have to deal with in our daily lives. Humans have necessarily evolved into creatures that survive by taking a few events and generalizing them into a prediction of the future that they think they can reliably act upon.

We touch a stove and are burned, so we don’t touch a hot stove again. A forecaster examines a stream of earnings reports that looks like the turkey’s first 1,000 days and predicts that the next quarter will be even better.

While such “inductive” reasoning serves us in many tasks, it does a very bad job of preparing us for surprises to come. Like the turkey on the day before Thanksgiving, the surprise comes abruptly, and the result can be shocking. One can learn overnight that the hand that feeds you can literally be the one that also wrings your neck.

Our goal should be to avoid being the turkey.

How can we do that in investing? We all rely on the past to help us cope with the future. But most of us rely too much on the recent past. We need to use more data.

Stock market strategies should not be based on the last five years, for example. It’s been a bull market for most of that period. Any strategy that’s worth its salt must be tested through at least a full cycle of rising and falling markets. Better yet, strategies should be tested through the two bull and bear cycles stretching back to the 1990s at the very least, as in our Illustration Generator. The turkey did not know what was coming, but the butcher with a larger perspective did.

Even when we have a lot of data, it is never enough. The turkey had a lifetime of data!

In the fall of 1987, when we moved all of our clients to the safety of money-market funds, there had never been a day in 100 years of stock market history when the stock market had fallen 25% in a single day. Yet, there were events that had signaled a negative stock market environment in the past that had not been as extreme.

You act on such signals even though you can’t predict that they will lead to a day as bad as a drop of nearly 25%. That’s why we provide tools such as the Crash Test Analyzer (you must log on to our website and be a financial adviser to access the tool) and our market environment indicators.

When we test a strategy, we can examine on a more micro level how various asset classes respond. A burn from a slight touch of a stove allows us to decide that putting one’s hand in a bond “fire” is not a good idea. And a strategy that does worse than its benchmark on a small down day can tip you off that it is going to have even more trouble with a major decline.

Of course, even this is not enough. Sometimes you are just surprised. “Every strategy works until it doesn’t,” is our oft-spoken mantra. The turkey’s strategy of daily eating at the feed trough always worked … until it didn’t. The only solution to this dilemma is to diversify.

While high fences and the clipped wings of the turkey prevented it from diversifying its risk, investors are not so limited. Instead, they have the freedom and ability to not put all of their eggs in one basket.

Traditionally, this has been accomplished by creating portfolios made up of multiple asset classes. The hope is that when most go down, some will go up.

But in the last two major market declines, almost all asset classes plummeted. Bonds and gold have been the exceptions. Yet, looking into our future, with bond yields rising, it’s possible that they will not deliver as much protection as in the past. And while gold often shines in a downturn (like now), few investors or advisors seem able to muster the 25% investment that would have given maximum protection in past declines.

Diversifying into a number of uncorrelated, actively risk-managed strategies is a sounder, more robust way of dealing with surprise. These strategies are usually not related to a single asset class, as they can dynamically switch or rotate into defensive positions when the environment warrants it.

A portfolio of these strategies can provide a more robust solution to “The Turkey Problem.” The key is uncorrelated strategies. If you choose strategies that “flock together,” all moving in the same direction most of the time, they are not likely to be uncorrelated. If you don’t choose recent losers with the winners, you will probably have a portfolio of all losers when the next bear market begins.

Remember, when constructing investment portfolios, you are creating your portfolio for what lies ahead. The risk you are preparing for is not in the past. Like with the turkey, the real risk is in your future.

Despite a down week in the stock market, we remain in breakout mode following the four downside moves that transformed the last 12 months into a choppy sideways pattern for most of the period. The six-week S&P 500 and seven-week NASDAQ streaks of consecutive weekly gains came to an end last week. Still, since 1971, the end of such streaks have seen better-than-average monthly, quarterly, six-month, and yearly returns most of the time. 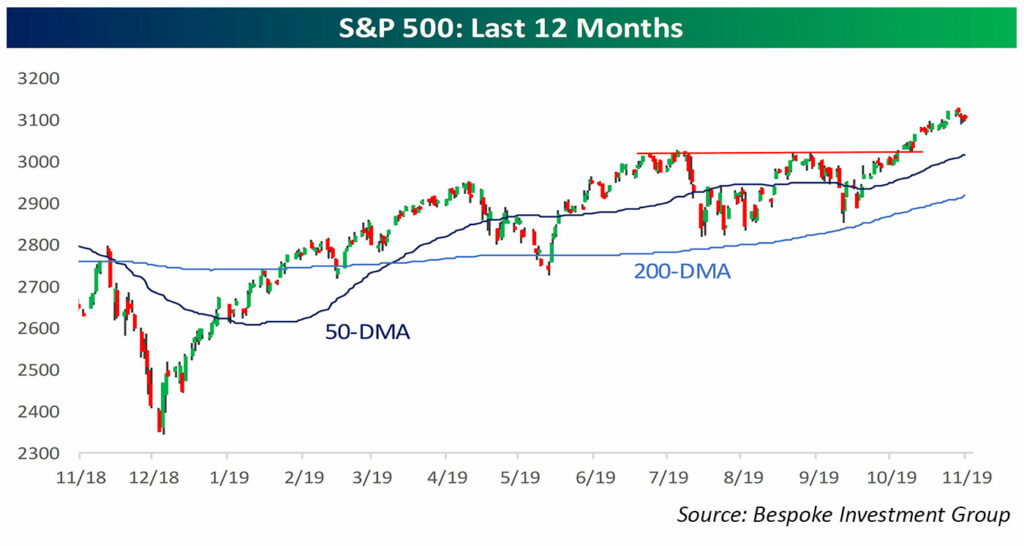 Despite a divided count on the number of economic indicators beating economist estimates (eight below, seven above, and one on target), we did receive positive results from both the service and manufacturing studies. This is great news since many had been pointing to the decline in manufacturing, suggesting further economic bad news in the future.

Housing reports were mixed, although forward looking activity was swinging higher. The index of leading indicators fell, while the number of unemployment claims rose yielding the two most negative reports of the week.

On a technical basis, it is increasingly looking like a battle between signals like the Hindenburg Omen and the Titanic Syndrome that highlight a split among market indicators occurring in uptrends or near market tops. We have had as many as 10 of these signals in the last month. In the past they have had a mixed record of prediction but seem to be most effective in suggesting weakness in the next month or two.

Contrasting with these ominous sounding indicators, most short-term patterns—and certainly market seasonality around the holiday—and the beginning of the next month suggest a continuation of the rally.

Our Political Seasonality Index is currently suggesting that this period is normally positive (with the exception of next Monday), although the mid-December swoon before the Santa Claus rally does commence earlier this year, on December 4.

As previously reported, earnings reporting season has been completed. The percent of companies beating their estimates has been at a very high level (topping the last four quarters). This has been the case despite the fact that average earnings declined a tiny amount for the quarter.

Although earnings reporting season has ended, many companies do report afterwards. So far, these have been positive as well, more often than not beating estimates. Retail companies have been especially encouraging.

Sentiment has been mixed. While the AAII survey of small investors has declined from its optimistic highs, the put call indicator has been signaling some short-term weakness. With more than two times the level of call (bullish) activity over put (bearish) activity on back-to-back days last week, this measure of the level of optimism is high. On a contrarian basis, this has been a reliable indicator of price weakness during the next month, although thereafter the probability of an advance is quite high. 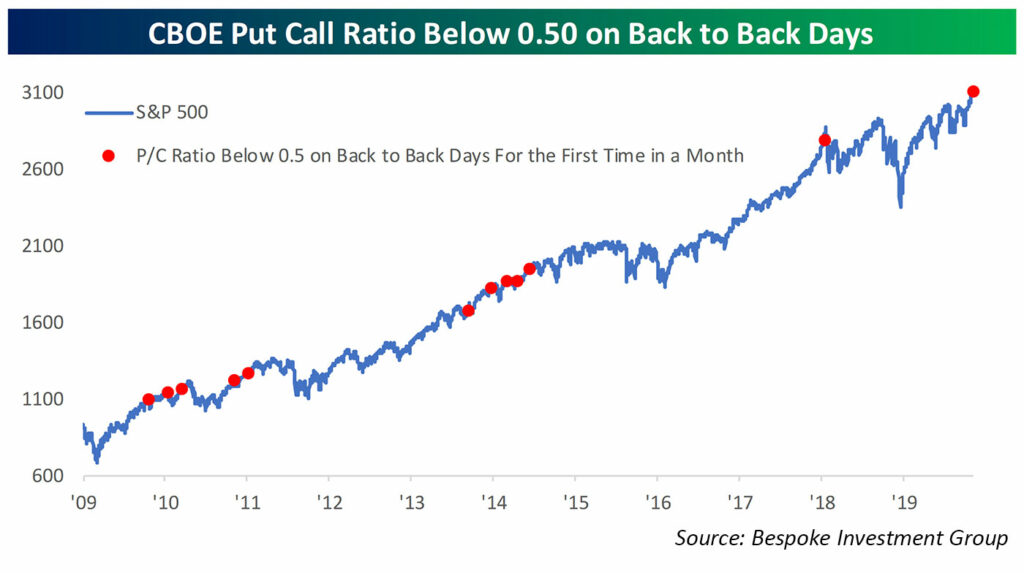 Short-term indicators have returned to a mixed posture. However, our QFC S&P Pattern Recognition strategy has detected a tradeable bullish pattern. As a result, at the end of last week it moved 80% into stocks.

Among the Flexible Plan Market Regime indicators, our Growth and Inflation measure continues to show that we are in a Normal economic environment (meaning a positive inflation rate and positive GDP). Our Volatility composite (gold, bond, and stock market) is showing a Low and Falling reading, which favors stocks and then gold over bonds—although all have positive returns in this regime stage. Gold has the largest historical drawdown of the three, resulting in the lowest risk-adjusted return.

I continue to believe that although a downturn may occur in the next 30 days, most evidence supports a rally through the end of the year.