There was quite a stir in the financial blogosphere last week over the “death” of the 60-40 balanced portfolio. The portfolio of 60% stocks and 40% bonds has long been the “safe” portfolio for moderate investors.

Yet, according to MarketWatch, a new report by Bank of America Securities (aka Merrill Lynch) suggests that the time for this “industry standard” portfolio is at an end. Authors of the report say the portfolio has fallen victim to low interest rates, both absolutely and in comparison to stocks.

With interest rates close to zero, believers in the death of 60-40 suggest that we are near the end of the interest-rate cycle. After nearly 40 years of decline, interest rates are now more likely to go up than down. As a result, adherents say, bonds probably won’t provide the same hedge against stock market weakness that they have in the past.

Of course, this argument has been out there for many years. It seems like every time investors conclude that rates can’t go any lower, they hit record lows. And the balanced-portfolio strategy continues to provide decent returns with reduced risk.

As 2017 drew to a close, most market watchers were predicting a long period of rising interest rates. This is just the market environment that the report’s authors fear will be the death of the 60-40 portfolio. Yet here we are, almost two years later, and interest rates are lower still. And since bond prices move in the opposite direction of interest rates, an investment in 10-year government bonds has grown over 8% since then.

During that time, the S&P 500 has risen 16.4% in value. By comparison, the Vanguard Wellington Fund, the industry’s oldest balanced fund, grew 12.4%—but with 45% less volatility (as measured by the standard deviation of the daily return).

A twist on the low-interest-rate argument

The authors of the report, portfolio strategists Derek Harris and Jared Woodard, have added something new to the low-interest-rate argument. They point out that the negative correlation between stocks and bonds that makes the balanced strategy work has been diminishing in recent years. They argue that when it generally reversed during the period from the mid-1940s to the 1990s, the balanced portfolio did not work as well. Here’s the chart they prepared in support: 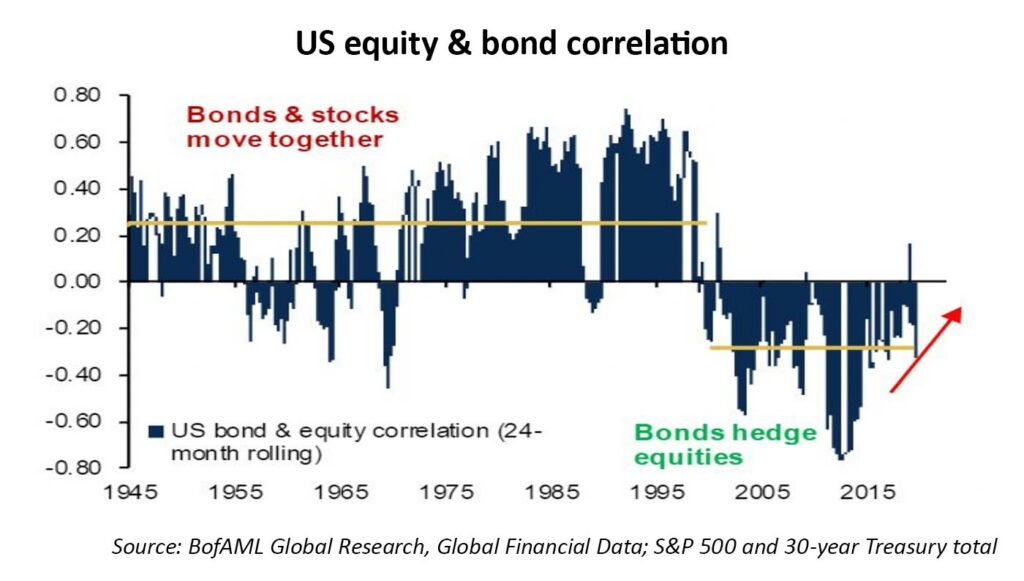 However, the chart also demonstrates that the correlated movement of bonds and stocks comes and goes. In other words, this strategy does not work all of the time, just like every other investment strategy known to man. It has times of high performance and times when it does not perform.

Yet a 60-40 balanced portfolio has been a standard of our industry. Like “buy and hold” investing, it works until it doesn’t.

New investors in active strategies or alternative investments may forget these examples when it comes to conventional portfolios. At the same time, they can be quick to bolt to the exits if the alternative or active strategy stumbles.

The balanced portfolio has a long and proud history. Since 1928, a portfolio composed of the S&P 500 and 10-year U.S. Treasurys has averaged a 9% return annually, according to DataTrek Research. Yet 60-40 could fail to protect a volatile stock market position if bonds and stocks start moving together again.

For example, when the S&P 500 crashed between the start of 1973 and October 1974, interest rates were rising. As a result, while the stock index fell 45%, the previously discussed Vanguard Wellington Fund almost matched the loss, dropping 42%.

Still, at least in recent history, it seems like this result is atypical. This is because bonds are now viewed as a safe-haven investment. Investors flock to them during times of crisis. And this can occur even when stocks and bonds have been moving together.

In the fall of 1987, stocks peaked in August. However, interest rates continued to climb, maxing out at 10.23% the week before the ’87 crash. The plunge in stocks on October 19 sent investors running for bonds, and rates sank to 8.88% in a week’s time. While the S&P lost 32.8% of its value between its top on August 25 and its low point on December 4, the balanced fund lost 22.8% of its value.

Are dividend-paying stocks the answer?

While I agree with the researchers that such a condition is good for stocks generally, I don’t think you can substitute high-yielding stocks for bonds in a portfolio. Bonds are there for crisis and uncorrelated periods. Stocks—dividend-yielding or otherwise—remain volatile, and they provide little in the way of protection from market downturns.

We need only look at the last three declines in the S&P 500 to see this in action. Although these “mini corrections” (all of them less than 20%) were nowhere near the “super bear” markets that occurred twice in the first decade of this century, they demonstrate the fallacy of the authors’ suggestion.

The “dividend aristocrats” are the cream of the crop when it comes to dividend-paying stocks. These stocks have raised their dividends each year for at least 25 years. An ETF that tracks the group has been around since 2005. The SPDR S&P Dividend ETF (SDY) tracks those stocks making the grade from the S&P 1500 Index. It should provide the perfect vehicle to test the authors’ theory.

No, dividend-paying stocks—even the aristocrats of their class—will not provide much protection if stocks come crashing down like they did back then. And although balanced portfolios lost less than the S&P 500 during the big crash, they did not do that much better. During times such as those, more is needed than simply diversifying between stocks and bonds.

60-40 is not dead—but there are better approaches

I believe that in times like these it is better to rent than to own. Rather than holding on to a static portfolio, having the ability to dynamically reallocate the portfolio as dictated by the market environment provides additional protection.

Similarly, access to more than just bonds for risk protection can help further still. Gold has many of the same characteristics as bonds but does not move in tandem with interest rates. Since 1972, when gold’s price was no longer fixed, gold has been as negatively correlated to stocks as have bonds. In addition, gold has been an excellent hedge during stock market declines.

At Flexible Plan Investments, all of our portfolios are dynamically managed and are designed to minimize risk and maximize opportunity. And each of our low-cost, turnkey, suitability-based QFC strategies—including All-Terrain, Fusion 2.0, and Multi-Strategy Core—use gold in the asset mix with or instead of bonds.

It’s alive! The 60-40 portfolio is not dead, but it can go into a coma like any other strategy. And it can use a shock treatment like active management—and a transfusion from other asset classes such as gold—to be transformed for the better.

Stocks continue in a long-developing flag pattern awaiting a breakout one way or the other here in the U.S. However, there are small signs that the international markets—developing and emerging—are beginning to break higher. 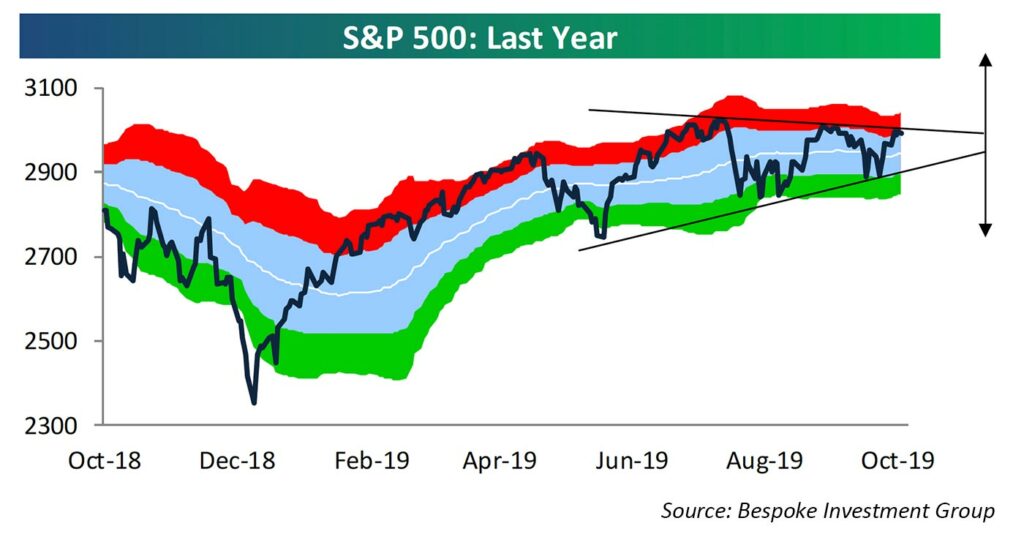 The consolidation being experienced here has not been helped by the failure of most economic reports in the last week to meet or exceed expectations. Instead, of the 19 reports last week, 12 fell short of economist estimates.

Earnings analysts have been forecasting that the latest batch of earnings reports for the third quarter will fall short of the level hit a year ago. The shortfall is predicted to be over 2%. If it occurs, it would be the first downturn in earnings since Q2 2016. Despite these dire predictions, the few early filings have seen 78% of the reports beat analyst estimates.

The news from the bond market has been mostly negative. The Federal Reserve is still expected to lower short-term interest rates this month. And the inverted yield curve has ended, but this is as a result of the steepening in rates in the longer-maturity issues. Last week saw the long-term government bond break its uptrend line to the downside.

As the following chart shows, with the turn higher in rates, mortgage rates appear to be bottoming. It may be time to wrap up refinancing if you have not done it already. 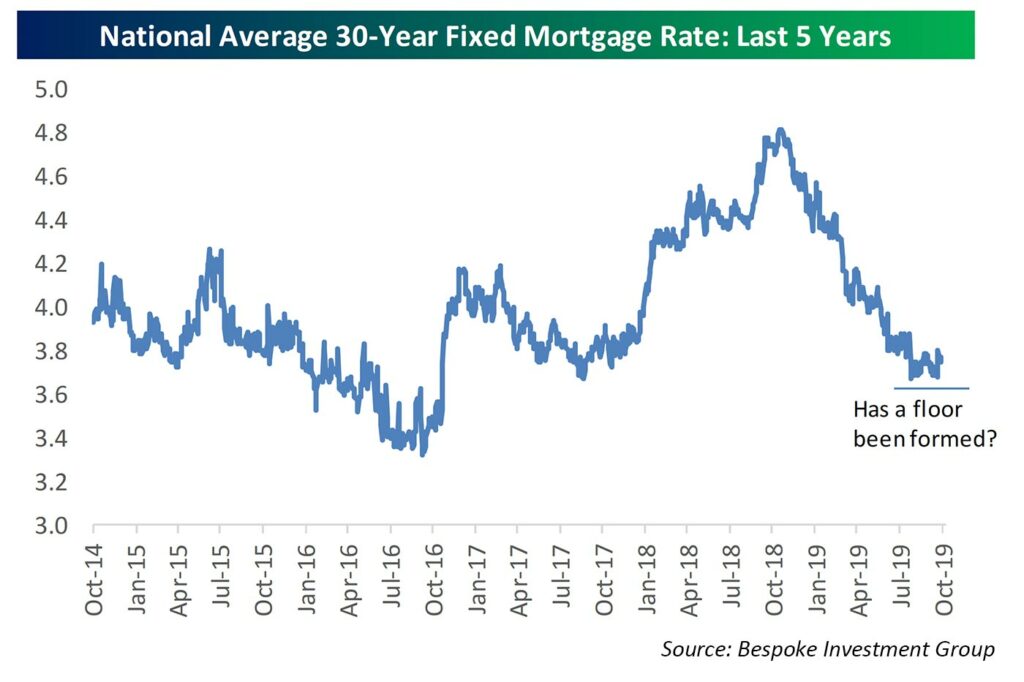 FPI intermediate-term tactical strategies are in a mixed state: The Volatility Adjusted NASDAQ strategy has increased its investment position to 40%, Classic remains fully invested, and our Self-adjusting Trend Following strategy is now 200% invested.

Short-term indicators are uniformly positive, and while most price patterns a week ago were sending positive signals, the latest batch suggests some negativity and volatility later this week. The QFC S&P Pattern Recognition strategy has moved back to cash and bonds.

The Flexible Plan Market Regime indicators continue to show that we are in a normal economic environment (meaning a positive inflation rate and positive GDP). Our gold, bond, and stock market volatility composite maintains its high and falling reading, which favors gold and then bonds over stocks—although all have positive returns in this regime stage.