How to take a “giant leap” forward in your investing

I recently wrote about how I am a true space nerd, fascinated by all things related to space exploration. So, on Saturday evening, I tuned in to Elon Musk’s update on SpaceX’s development of the Starship spacecraft.

Amazing! Musk showed off his latest prototype of the Starship at the presentation. A stainless steel wonder, the ship can be built at just 2% of the cost of the current carbon fiber and aluminum spacecraft in use. It also features the “rapidly reusable” booster and cabin that has made SpaceX the leader in private space development. The new Raptor engines have passed all of the requisite tests, and the first Starship test flight is scheduled for next year.

While I have not been a fan of Musk’s Tesla auto efforts (I love the design but have always been skeptical of his production estimates), I am amazed by the progress of SpaceX. I remarked on this and the prospects for SpaceX or NASA to once again transport a person to the moon to a younger friend. He asked, “Didn’t the Chinese just do that?”

After a long pause, I replied that “No, the U.S. still holds the title as the only nation to pull off that accomplishment.” It was a long time ago—50 years for the first landing and 47 years since the last time. (How is that possible?!) Still, the Chinese did carry out an amazing accomplishment on January 3 of this year when they landed an unmanned lunar rover on the dark side of the moon.

My friend’s next question was inevitable: “Why haven’t the Chinese put someone on the moon?”

The answer: The design and testing phase takes a very long time and a great deal of money. It took the U.S. almost two decades from the time the Eisenhower administration targeted a lunar landing until its accomplishment.

During that time, we went from drawing boards to rockets that mostly failed upon take off to early successful test flights. We then went from Mercury to Gemini and finally to Apollo, all with the goal of placing a man on the moon. The Apollo effort by itself is estimated to have cost $25.4 billion, about $153 billion in today’s dollars!

China originally committed to a crewed space program in July 1967. In October 2003, Yang Liwei became the first person sent to space by the Chinese space program. He spent 21 hours and 14 orbits in space. This accomplishment took 36 years of planning.

NASA’s space budget (separate from the military) is $21 billion this year. In a speech earlier this year, Vice President Pence said that NASA’s present goal of taking us to the moon again by 2028 was too distant. He called for a return by 2024. The Trump administration backed him up by calling for an additional $1.6 billion in spending to be added to NASA’s budget to help make the new goal possible.

While 17-year-old SpaceX and Moon Express (a former Google Lunar X Prize competitor) are demonstrating that the capability for space exploration can be developed more cheaply and quickly than in the past, they and NASA still have years to go before humans will return to the moon. Most truly significant goals take time to be realized.

A giant leap for your portfolio: FPI’s new core and explore strategies

I started Flexible Plan Investments, Ltd., in February 1981. It began from ideas and computer programs that I began to formulate and build back in 1968. It started by offering just one quantitative strategy. Today we offer over 100 strategies and risk profiles.

Each strategy that we have created has gone through a design and testing phase that can take years to complete. And our research staff has grown from an unpaid staff of one (me) to a team of nine skilled professionals and a yearly budget of over a million dollars.

Thousands of would-be strategies have probably been killed in the testing and development phase in just the last 10 years. And, as in every endeavor, not every strategy has worked out as planned.

We introduced our Fusion strategy in 2013. In 2015, it ran into a sideways market that lasted until 2017. Fusion has trend-following elements, and sideways markets are its biggest nemesis. However, in 2015, our substantial research staff began formulating changes to make Fusion better at dealing with those types of markets. Even when that round of sideways markets ended, we kept improving the strategy.

Last month, we brought out the latest version, with another round of updates. QFC Fusion 2.0 not only incorporates the latest advancements to the strategy but also uses our sub-advised Quantified Funds (soon to number nine funds in total, the latest being our Quantified Evolution Plus Fund—QEVOX—which launched September 30). This allows us to provide fund fee credits using all of our subadvisor fees to offset a portion of the QFC Fusion 2.0 advisory fees.

While QFC Fusion 2.0 creates a portfolio that invests in both core and explore strategies, the Multi-Strategy services separate the two with discrete core and explore versions. This gives financial advisers the ability to create an even more customized portfolio for their clients.

Each of our newest strategies is what we call a “strategy of strategies.” By this we mean that rather than being strategies that simply trade various index funds or asset classes, they allocate among a variety of strategies. They are designed to diversify away “strategy risk.”

Our new strategies are each designed to minimize “strategy risk.” In fact, they were developed to deliver three levels of risk and opportunity management for investors:

Each of these three new strategies is meant to be “turnkey.” Flexible Plan does all of the fund selection, allocating and weighting of positions, monitoring, reallocation, selection of new strategies as they become available, and dropping of underperforming strategies. This is a fully quantified process, which means it is entirely researched. The process uses time-tested methods, and we provide the discipline to relentlessly execute the computerized strategies for our clients and advisers.

We are not NASA, but we have been developing investment strategies with a “risk management first” attitude for almost 40 years. In that time, we have learned what the Chinese have always known and are experiencing again today with their space exploration program: that it takes years of investment, hard work, and effort to take a “giant leap” forward.

It was a messy last week in September as all of the major U.S. asset classes declined. The major market indexes finished down last week: The Dow Jones Industrial Average lost 0.43%, the S&P 500 Stock Index fell 1.01%, the NASDAQ Composite declined 2.19%, and the Russell 2000 small-capitalization index tumbled 2.52%. Bonds dropped slightly and spot gold closed down 1.31%.

I have often remarked that stocks fall when investors are faced with uncertainty. Lately, it seems that the headlines are serving up heaping mounds of uncertainty with every news cycle.

The U.S. and China continue to bob and weave in the middle of the ring, circling each other like heavyweight fighters. Each side faints a jab. Each side retreats a bit. And the trade-agreement sparring continues. In the meantime, the world audience waits for either the bell to ring or a real fight to break out.

Then there’s the political fight within Congress and with the president. It seems like each side is taking a turn at rope-a-dope, and the crowd is getting restless and bored. There is so much real work to get done.

It used to be that there really wasn’t any way to quantify the uncertainty investors feel when events like these occur. However, in this age of quantitative analysis, somebody had to do it. Three talented professors from prestigious schools have created the Global Economic Uncertainty Index. 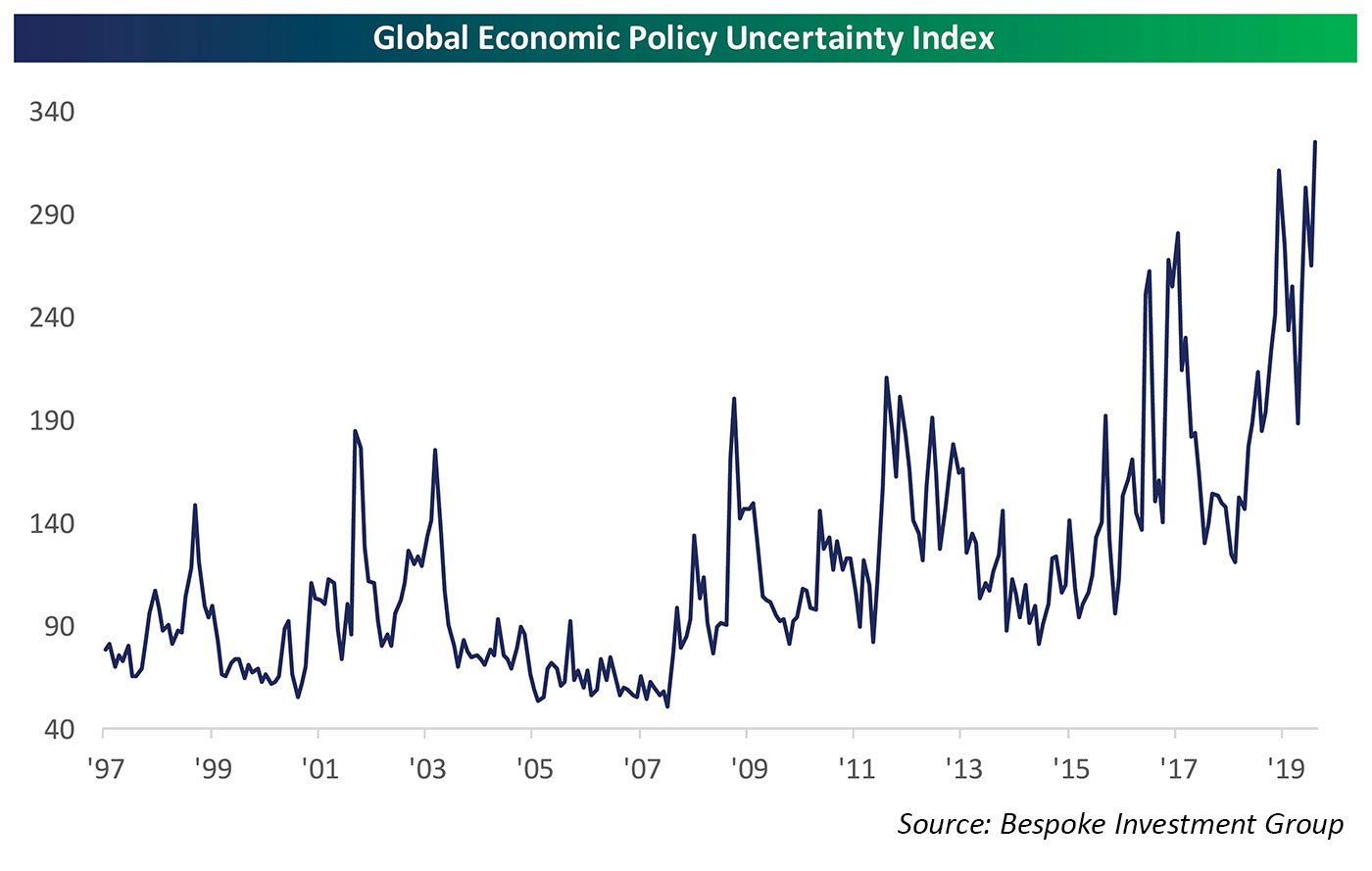 Even a cursory review of the chart created by Professors Baker, Bloom, and Davis paints a picture of growing uncertainty about economic policy. We’ve moved to levels not seen since the financial crisis.

This uncertainty is not helped by the rising U.S. dollar, which is putting competitive pressure on U.S. goods; technical charts that show the S&P failing to break out and still lagging the index high-water mark set back in July; and an inverted yield curve. The current rare steepening inverted curve does put us in a sector that historically has seen negative one-year returns on average and more losses than profitable 12-month periods.

There was a great deal of discussion about the dismal manufacturing numbers Monday. While the U.S. has solid company internationally in this regard, it is worth noting that in the past such numbers have not led to precipitous declines. 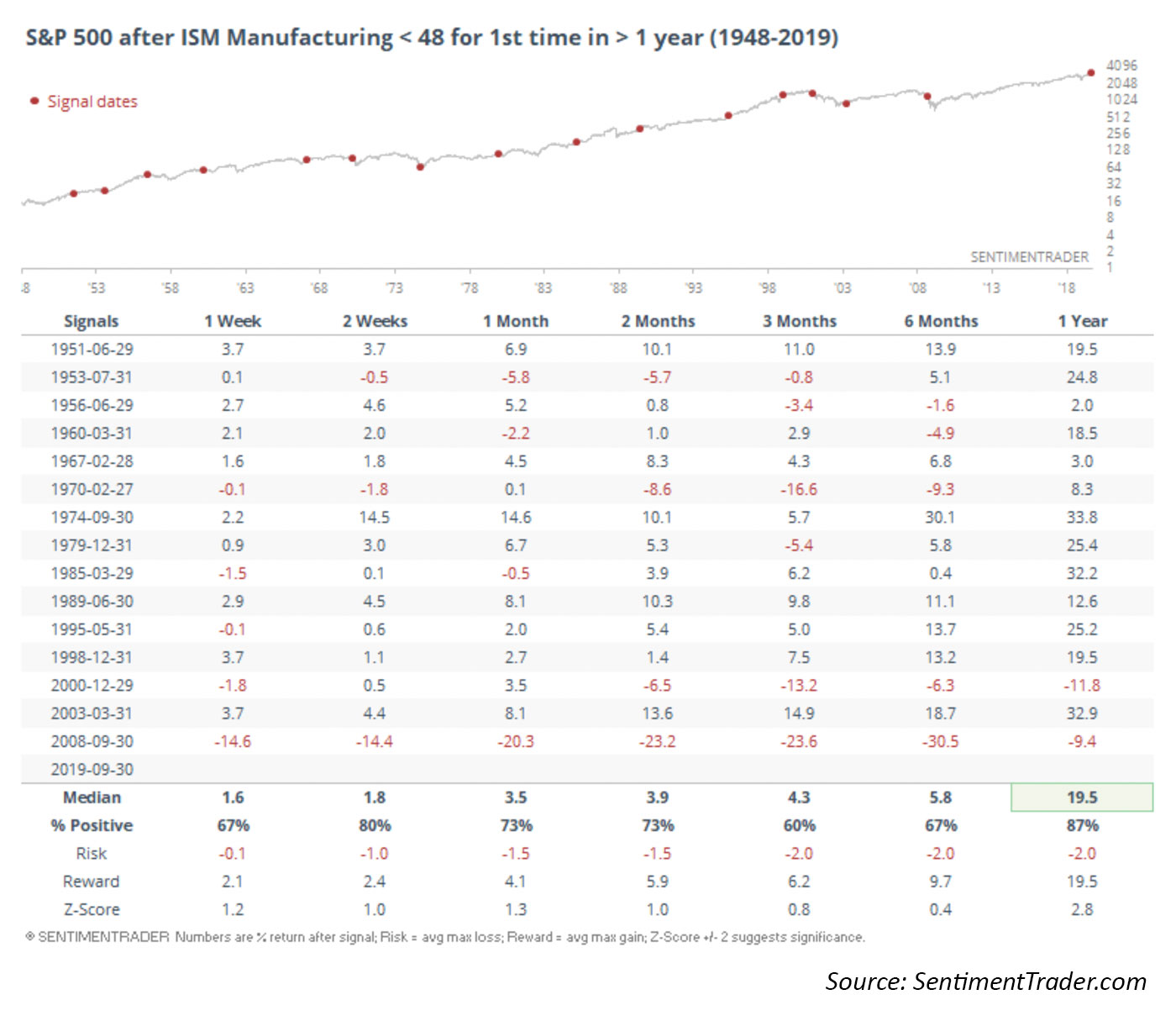 The Federal Reserve is no longer tightening interest rates. Instead, it is lowering them as it tries to keep up with the bond market’s own reduction in rates. The results are bond yields that make the stock market look attractive. The yield on the S&P 500 is now 17% higher than the yield on 10-year Treasury bonds. 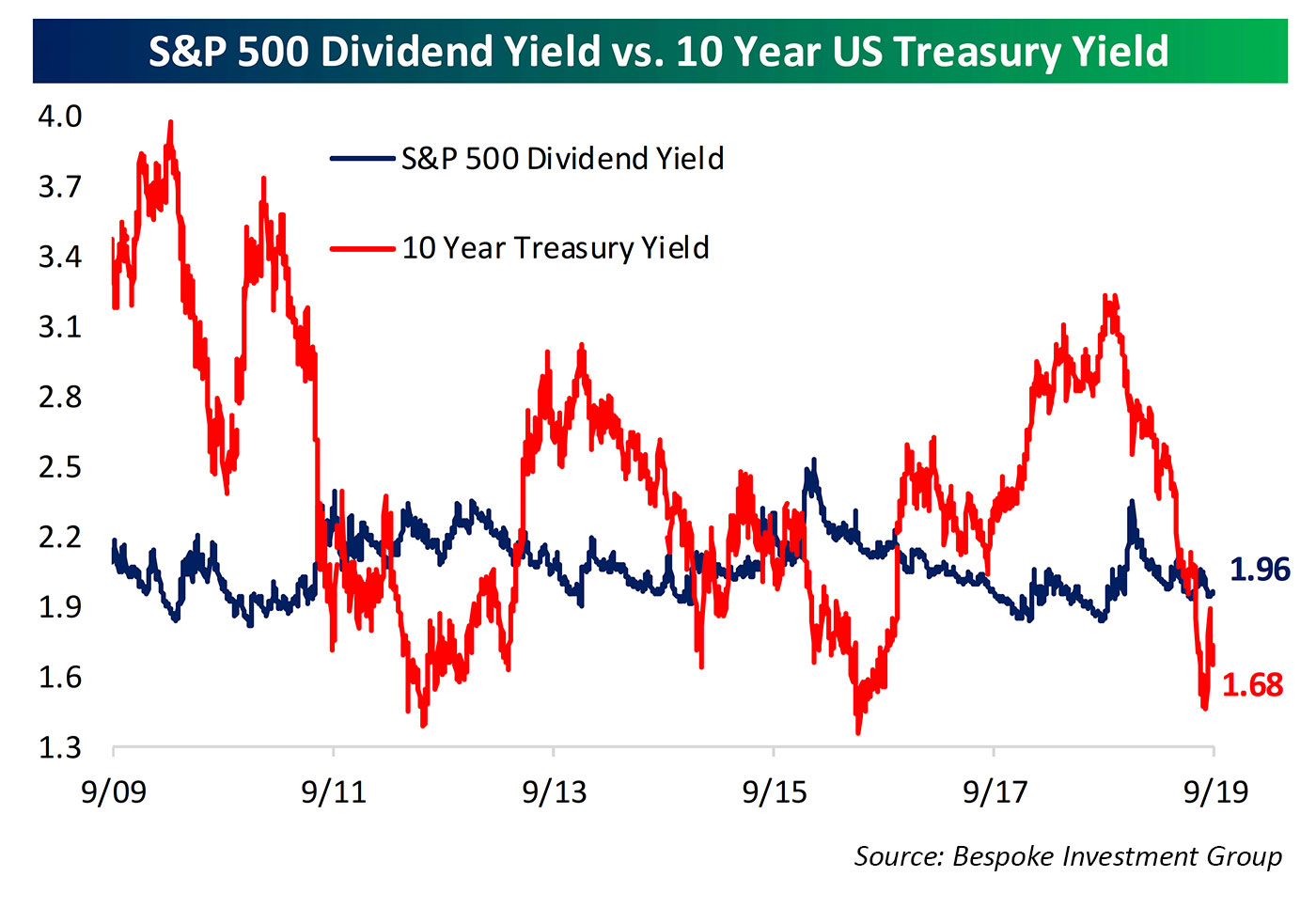 Two contrary indicators are both suggesting gains ahead. Earnings reporting season is almost here, and analysts have been busy revising their earnings estimates. So far, these have overwhelmingly worked out to be reductions in their previous guesstimates. This sounds bad, but in the past, this has lowered the bar and led to more positive earnings surprises and higher stock prices.

Similarly, small investors remain extremely negative on stocks. They just have not returned to the stock market since the fourth quarter of last year. In the options market, they continue to load up on puts, betting on a stock market decline. Unfortunately, historically, such pessimism has led to higher stock prices, not lower. 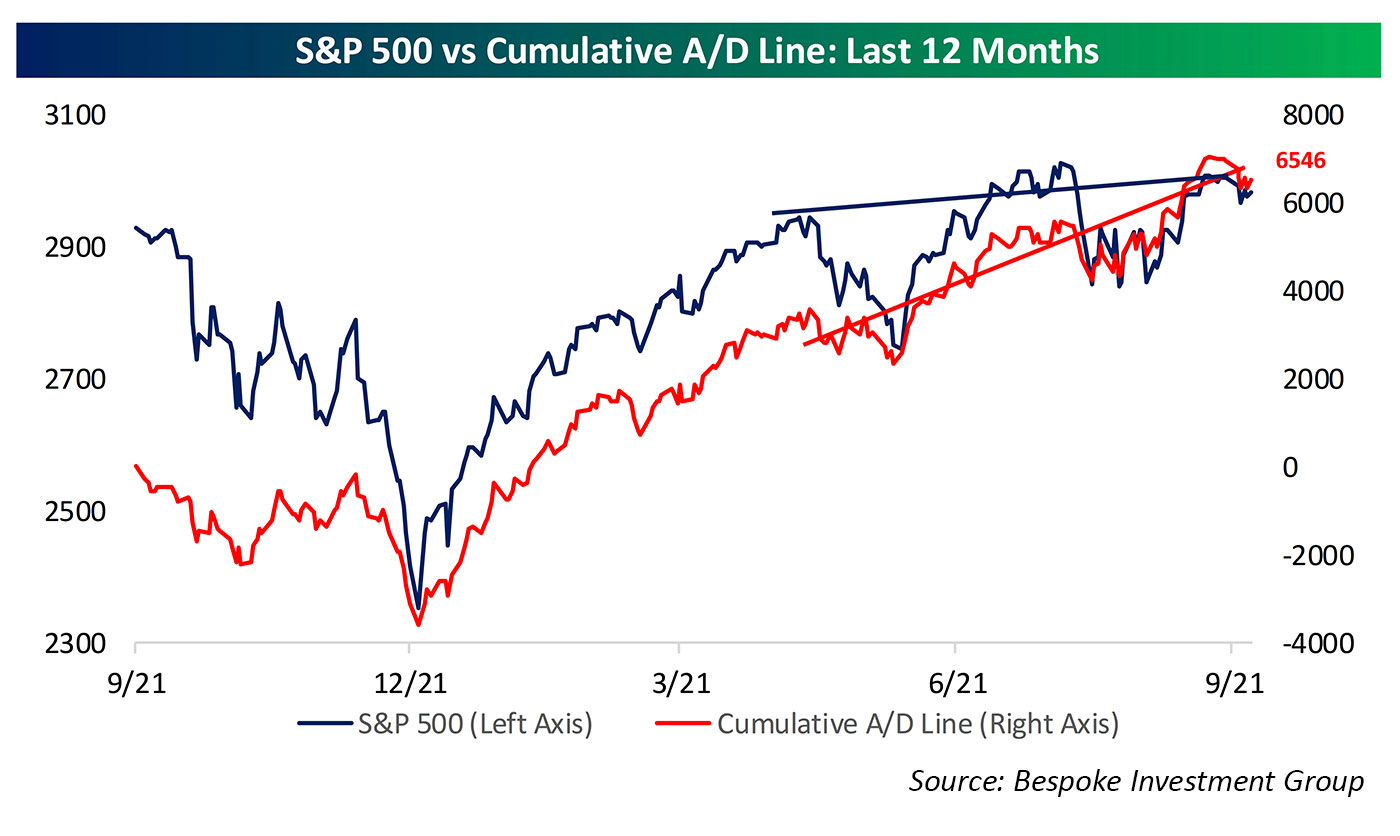 With today’s decline, the market is oversold, even as market breadth remains strong, making a new high that usually presages a new high by the S&P 500 Index itself. While our Political Seasonality Index does not bottom until October 9, it does rally from there before a final month-end swoon (our Political Seasonality Index is available post-login in our Solution Selector under the Domestic Tactical Equity category). October tends to be a positive month, although a volatile one. And, of course, it is the first month of the fourth quarter, which is historically the strongest quarter for stocks of the year.

Overall, while there could be some short-term weakness, the longer-term outlook is on balance still positive for stocks, gold, and bonds. Our Market Regime indicators continue to send this message as well. Our intermediate-term trend strategies for equities reflect the positive longer-term momentum and are still fully invested.

Hopefully, stocks will be seeing their own moon shot before the year is finished.