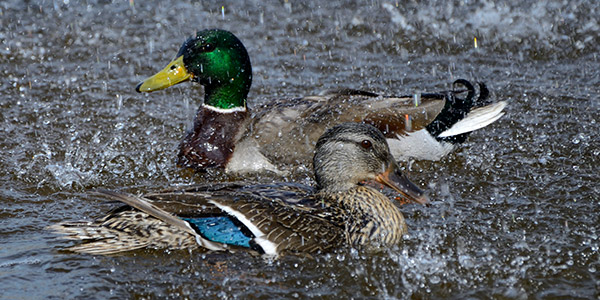 I looked outside at the lake, the rain streaming down the window, saw a flock of ducks upon the water and couldn’t help exclaiming to my wife, “Lovely weather for ducks!”

So much rain! I saw a note Friday that said the nation has had the rainiest start of the year … ever. I know it has been a very wet and late spring here in Michigan.

And it’s easy to believe everyone is experiencing the extraordinary wet weather, as every other news story seems to report on yet another area dealing with flooding.

The old expression about the ducks seems timeless with all of the rain. The idiom traces way back to the mid-1800s. Versions of it have been used in poetry, songs (including a Judy Garland song from a 1950s movie), and even as the name of a Pennsylvania rock band.

And while it does express frustration at the amount of rain, it also has a more optimistic meaning. I’ve always taken it to mean that while the day may be a rainout for us, it’s positive for others—that is, the ducks.

It’s kind of like the financial market expression “There’s always a bull market in something somewhere!” I know I used that phrase all of the time in the mid-1990s when we first brought out our Evolution methodology for ranking investments by momentum.

The beauty of momentum ranking is that you can use it to compare asset classes that have little relationship to each other. It is a ubiquitous methodology because an investor only has to calculate a return percentage between two points to apply it. By measuring the return of many investments over the same time period, you can determine which asset class has the most momentum behind it and choose the leader in which to invest.

We still use the methodology today in our Market Leaders series of strategies, Evolution Plus, Fusion, and most of our Quantified Funds and QFC strategies. Each of these strategies uses momentum (the change in price between two points in time) to sort out which investment from a group or universe of investments is leading the pack.

Since it is so simple and requires no fundamental data, you can look at equities, commodities, and bond investments under the same microscope. In a single run, you can find out whether stocks, bonds, or gold are doing well.

When you perform the calculations, you often find that while some asset classes are falling, others are rising. There’s a bull market somewhere …

Stocks have been drifting lower since hitting a new high on April 30. This was just one day after I wrote in this newsletter, “With the stock market overbought, some internal measures failing to keep up, and political seasonality peaking, it would not be out of character for the stock market to experience a pause here or even a decline of as much as 5%.”

(It is tempting to blame the stock weakness today on the trade negotiations. But this quote demonstrates that there were other factors indicating a downturn might be coming without waiting for the China headlines that came weeks later. As investors, we often tend to attribute market movements to the headlines rather than other influences that came before the front-page stories.)

Ah … but back to the ducks. While stocks have been falling, it seems to have gone unnoticed that other asset classes (the ducks) have been flourishing. Here’s an example of three charts in one since the stock market high point on April 30: 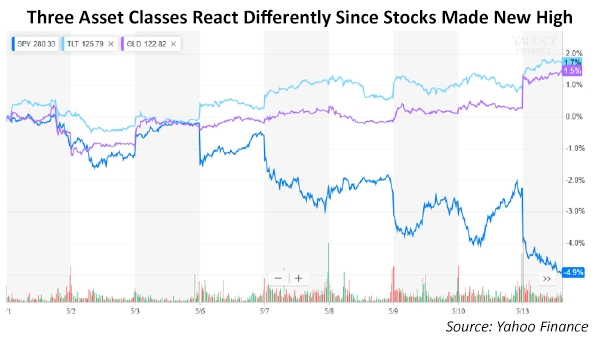 As you can see, while the ETF representing the S&P 500 (SPY) has fallen 4.9% from its April 30 high point to its intraday mark (about 1:30 p.m.) Monday, the 20-year government bond ETF (TLT) has gained 1.7% and the largest gold ETF (GLD) has advanced by 1.5%. Even as stocks struggle, other asset classes are celebrating good times.

This was also the case during last year’s fourth quarter when stocks hit new highs and then tumbled.

Of course, this is the basis for using diversification in investor portfolios. And while these non-stock asset classes outperformed the S&P 500 equity index last year, it’s clear that diversification by itself is not enough. It would have taken a very skewed allocation to bonds and gold (84.3% in bonds and gold, and just 15.7% in stocks) to offset the full decline in stocks that occurred in the fourth quarter. Still, a passively allocated portfolio of 60% equity and 40% bonds and gold would have reduced the 19.02% loss experienced by stocks to just -9.9%.

Actively managed strategies behave like asset classes. Diversification among them can also reduce losses when stocks turn south. In addition, using such strategies adds another risk-management tool that just diversifying among passive asset classes does not: active management.

For example, substituting a 60% Systematic Advantage allocation in place of the S&P 500 and replacing the 40% bonds and gold asset classes with Government Income Tactical and TVA Gold would have further reduced the losses (after max fees) to just -4.9%—a more than a 50% reduction over a passive asset-class balanced portfolio, and a 75% discount over an investment only in the S&P 500.

Either way, when a storm hits, it’s lovely weather for ducks. Diversification can help—and diversification among actively managed strategies can help more.

Monday brought another gap opening (prices opening higher or lower from the previous day’s close with no trading in between)—these seem to be becoming more the rule than the exception. Making matters worse, the gaps have been more to the downside rather than the upside. The only silver lining seems to be the old stock market saying that stocks eventually will fill the gap. When that happens, it will have to be to the upside.

Last week saw the stock indexes generally fall 2% or more. Monday they all fell more than 2% in just one day. In contrast, for both the week and the day, both bond and gold indexes gained in value.

While stock declines of more than 2% are not normally something to be positive about, the Bespoke Investment Group reports that when they occur on Mondays good things happen. There have been 51 2%-plus Monday declines since the S&P 500 SPY ETF began trading in 1983.

After such an event, the next day has gained on average 1.1%, and a week later the Index has been 2.4% higher. Since the end of the last “super bear” market decline in 2009, days like Monday have been followed with a median return of 0.79% the next day and a 3.3%-plus return over the next week, with positive weekly results 14 out of 15 occurrences.

However, with Monday’s drop in prices following the weekend trade news, it’s hard to get too positive. The fact that we closed below the 50-day moving average, which usually provides support, was discouraging. But we are slightly above my 5% forecast (2,798.35), and the 200-day moving average line (now about 2,775) can normally be counted on to at least pause any continued descent.

Part of the problem is that, although earnings season has not finished yet, earnings reports so far have not been as strong as past quarters. In fact, the percentage of reports beating earnings expectation has now been lower than the previous quarter’s for five straight quarters. And we have experienced the lowest percentage of positive revenue surprises since Q4 2016. 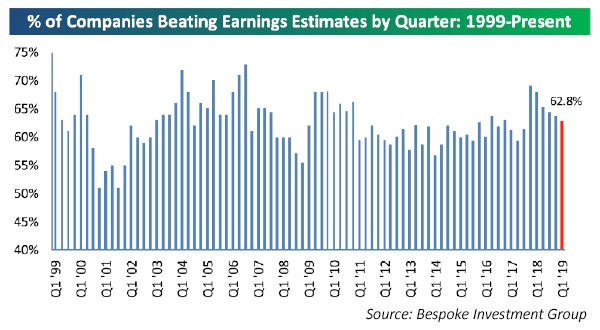 With such an earnings backdrop, it does seem that it will be difficult to rally much positivity in the market. Even with earnings beats representing a majority of the reports, market reaction has been tepid. Like last quarter, stocks that beat the analysts’ estimates have gone up less than is normally the case, and where the companies failed to beat estimates, their shares have fallen more than usual.

Further compounding the picture for equities are the current seasonal tendencies for share prices. As we have been pointing out for some time, positive seasonality as measured by our Political Seasonality Index was to have topped out on May 9 (our Political Seasonality Index is available post-login in our Solution Selector under the Domestic Tactical Equity category). And for the last 10 years, the worst week for equities on average has been the present one. On average, stocks have fallen 1.78% this week. Of course, on the bright side, with a 2.41% decline Monday, if we finish the week down 1.78% that will amount to a gain for the rest of the week!

There was one concerning economic report last week: The number of unemployment claims grew for the third week in a row. On a week-to-week basis, the S&P 500 tends to track in the opposite direction of this measure. So when claims go up, the S&P 500 often falls.

Many of our strategies did begin to grow more defensive after prices peaked. I noticed that Volatility Adjusted NASDAQ strategy cut its equity exposure from a leveraged 200% to just 60% during this month. Others, such as Self-adjusting Trend Following and Classic, have held their ground.

Of course, as we were pointing out earlier, the returns experienced often depend on the asset class the strategy trades. Those that trade gold and bonds have prospered, while stocks have weakened. And our All-Terrain strategies have easily outperformed equities lately as they make extensive use of both.

There have been no changes in our Market Regime indicators. They remain supportive of all of the types of strategies, but they do favor gold and bond strategies at the moment.

After all, it’s lovely weather for the ducks.