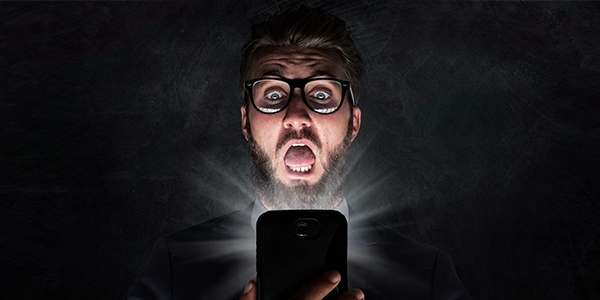 Investors woke up Monday morning to the news that North Korea had fired a group of test missiles 200 kilometers into the sea over the weekend. Morning traders also had to deal with a new tweet from President Trump warning the Chinese that if substantial progress was not made this week, 25% tariffs on an expanded list of trade goods would go into effect on Friday.

Surprises like these are a fact of life in the financial markets. But with instant global communications and the 24/7 news cycles, the intensity with which we report these surprises seems to be much higher than it was even 25 years ago—let alone a century ago.

The pitfalls of investing in the “Information Age”

When Itek founder, Richard Leghorn, coined the phrase “Information Age” in 1960, I don’t think even he had any notion of how enduring that age would be. Nor could he have known how intrusive and all-encompassing its effects would become.

We used to receive news stories in the daily newspaper or on the evening news, but today cable news and business channels provide constant financial alerts and breaking stories affecting investors. And online publications and news feeds stream into our homes, phones, and businesses minute by minute.

Despite the deluge of news, our friends at the Bespoke Investment Group continue to put out an article, at least each quarter, with the latest headlines superimposed over the S&P 500 chart. 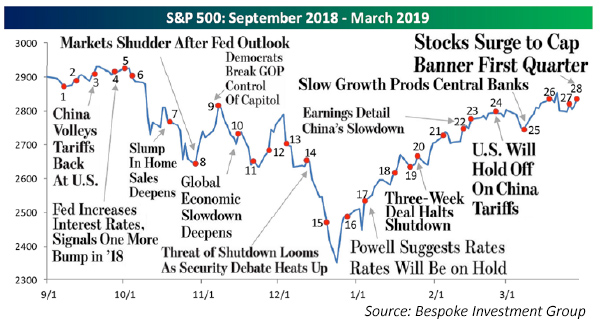 As is evident from the chart, sometimes news seems to start a prolonged price move and sometimes it doesn’t. For example, the news that China was going to match our tariffs with their own came very near the market top in September. Yet when news came out that the U.S. would hold off on imposing new tariffs on Chinese goods late in February, the immediate effect on stocks was also a decline.

It’s amazing how often news headlines seem to list the market’s direction without an explanation. Stocks are said to have “surged” or “seesawed in wild trading” or “tumbled.” Or, like one from last November, the headline might exclaim, “Selloff Erases Market’s 2018 Market Gains.” But these price-movement headlines always come after the fact and rarely seem to have much predictive value.

Investing by the numbers, not the hype

Most professional investors do not use headlines to help manage portfolios (other than on a contrarian, sentiment basis). Investing in response to news headlines is like trying to drive while looking only in the rearview mirror: Unless you’re trying to go backward, such a practice isn’t any help.

Still, this is not to say that history has no bearing on the future. History can provide us with examples of past events that may provide us with guidance in our future investing.

Major shifts by the Federal Reserve are a good example of this. When the Fed said it was going to continue raising interest rates in September, the market top was near. In early January, when Chairman Powell indicated that rates were going to be put on hold instead, the bottom of the decline was in place and a rally ensued.

Yet, in most cases, the news stories and headlines are pretty subjective. Like most of today’s news, even business news is liberally salted with opinions.

For that reason, we find the quantitative side of business reporting a more valuable way of using market history to manage investment portfolios. Daily price changes to the major indexes, economic news reports, and earnings reports are the grist for the investment strategist’s mill.

Though these data points are less likely to be “opinionized,” even here there are “statistics and damned statistics,” and it is often said that writers can cite statistics for just about any position they care to take.

Rather than subjectively interpreting the numbers that the financial press serves up to us daily, at Flexible Plan Investments, Ltd., we use them as the sole input into our computerized strategies.

Sure, the computer programs reflect the creator’s insights into what causes markets to move. But once the author’s rules have been specified, they can be tested over years of financial data. The results allow us to assign probabilities for similar reactions to the numbers reported in the press in the future.

This provides a disciplined, repeatable process to guide investment decisions. In our minds, this is a better approach than trying to emulate the reactionary behavior of the honored guest at the party when friends yell “surprise!” Yet this is what investors are doing when they manage their portfolios in response to the seemingly daily surprises streamed by today’s financial news.

Counting this Monday, the last four trading days have been full of surprises. It all began with Federal Reserve Chairman Powell’s remarks last Wednesday afternoon following the Fed meeting.

Before he spoke, the S&P 500 was exceeding the previous week’s all-time record closing high. By the time it hit its low on Thursday, the Dow Jones Industrial Average (DJIA or Dow) had fallen more than 500 points. Then on Friday, a big positive surprise in the latest jobs report sent stocks higher, and the Dow gained almost 300 points.

Enter this week. As Monday morning investors tuned in to their market news and heard about the two news items that I discussed previously, the Dow futures were down more than 500 points. When the market opened, the Dow was down more than 450 points.

Yet by day’s end, the Index had gained back all but 66 points of its losses. Such is the short-term power of news headlines. They can cause sharp price changes, but as the ups and downs of the last week show, they can also cause “pinball-esque” movements, with prices darting back and forth in opposite directions.

In the past, relatively few days have seen an opening with a gap greater than 1%. Looking at just those that have occurred in the last two years, it is evident that the event has bullish implications in the short term.

The remarks from Fed Chairman Powell that set last week’s round of surprise reactions into motion had to do with the market’s expectation that interest rates needed to move lower. When Chairman Powell said that the Fed was not leaning toward cutting rates, which bond futures were telegraphing as likely before the remarks, the stock market sagged in disappointment.

Actually, as the following chart shows, stock market traders should have been happy that the Fed held rates steady at the meeting. In the past, such steadfastness has led to higher stock prices over the next month. 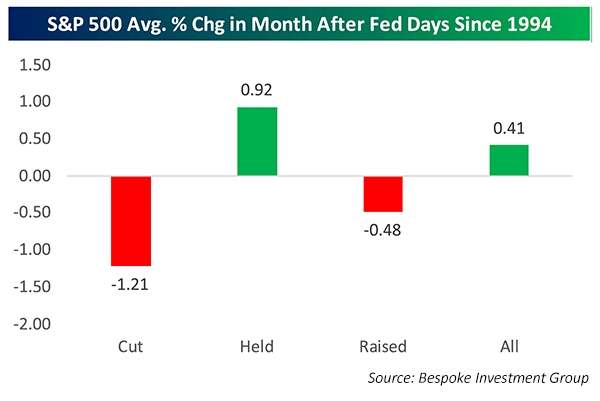 In fact, when the Fed held steady after the last two meetings, monthly stock market gains were 4.17% and 2.97%, respectively. The stock market’s reaction to Powell’s surprise announcement last Wednesday was the opposite action to take based on history.

One reason the market was expecting the Fed to lower rates has to do with recent monthly economic reports. Going into April, we had experienced seven straight months of more negative than positive year-over-year (y/y) comparisons, the longest down streak since 2015. 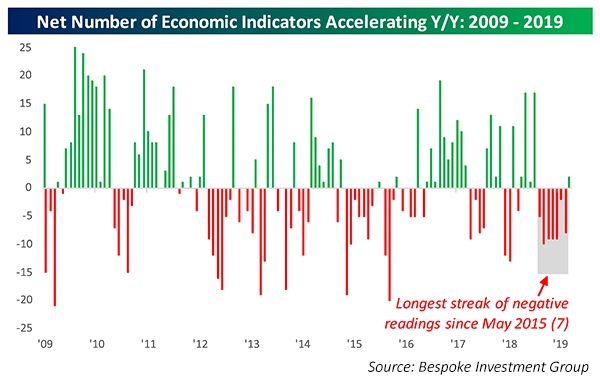 This weakness had earlier caused the Fed to stop raising rates. Ergo, the market reasoned, it should now lead the Fed into a period of rate reductions.

But, as the chart shows, April was a turnaround month. More reports were positive than negative in the y/y comparisons of actual results. Interestingly, economic surprises (economic reports that show a greater-than-forecast result), which had also been declining, have reversed direction and are heading higher too.

More than half of the companies have reported. Earnings reports, too, have been on the positive side, besting the last few quarters as they continue to rack up better-than-expected numbers. Unfortunately, the revenues reported have not been exceeding analyst estimates. Currently, they are besting those estimates at a more than 50% rate but at a lower rate than has been seen since the quarter just prior to the 2016 election.

Our Market Regime indicators remain unchanged. Both indicators’ current stages have seen good (although not great) performance by all three asset classes (stocks, bonds, and gold).

The short-term indicators that I watch remain positive, and our intermediate-term tactical strategies are maintaining their fully invested posture in stocks. Most that can employ leverage are doing so.

The stock market has had its fourth-best start for the year in history. This has usually led to a positive return for May. Eight out of the 10 best market starts produced a higher high. However, percentage-wise, the gain generated was less than the market’s average gain in the last eight months of a typical year. Furthermore, the two years that were losers were two awful stock market years: 1930 and 1987.

It should come as no surprise, since our Political Seasonality Index for all of 2019 was published in January, that the Index is topping out on Thursday (our Political Seasonality Index is available post-login in our Solution Selector under the Domestic Tactical Equity category). This signifies the historical May top in the stock market (based on the daily price history of the DJIA back to 1885). This could definitely lead to more choppiness in the stock market indexes in the very short term.

However, as pointed out previously and in the studies I reviewed last week, this is not a year to “sell in May and go away.” Rather it seems more likely that the surprising strength of this year’s stock market will give birth to more positive and negative surprises to come. But when the year comes to an end, we will probably see stocks at higher levels.