Is it the season to “be patient”? 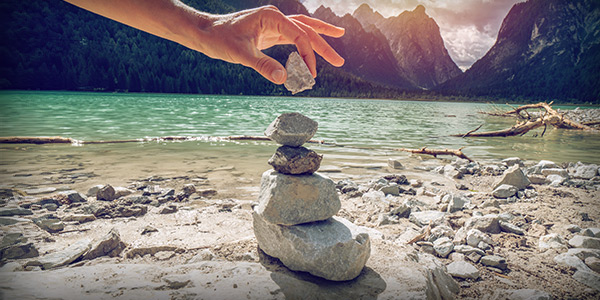 The phrase “be patient” has been thrown around a lot lately.

In a world where Amazon Prime, Alexa, Waze, and Twitter tend to define one’s attention span, being patient is an awfully hard thing for many people to do.

Nonetheless, we are hearing it just about everywhere recently:

And in the worlds of finance and politics, “patience” has been the word over the past several weeks:

Somewhat miraculously, it did—after one of the worst pre-Christmas Decembers for the market in recent memory. According to noted technical analyst Tom McClellan, “The Santa Claus rally consists of the last 5 trading days of the year plus the first two of the next year.” Based on his research, this period has been positive for the U.S. equity market in 78% of the years since 1928, and this time eked out a gain of 1.3% for the S&P 500.

Largely on the back of Powell’s comments, an already positive start to 2019 accelerated at phenomenal speed. Respected market analysts, who had downgraded their 2019 estimates for the S&P 500 in late December, suddenly found themselves in a position where they no longer had to caution extreme patience in waiting for markets to find their way back to the previous highs of September 2018 (though the jury is obviously still out on that).

“Remarkably, the S&P’s gain of 6.48% over the first 13 trading days of the year ranks as the 6th strongest start to a year on record for the index. … (However) bulls hoping that a strong start means good things for the rest of the year should look elsewhere. In the 8 prior years where the index gained 5%+ through 13 trading days, the S&P fell for the rest of the year 5 times, and the average rest-of-year change has been -3.2% (median –10.54%). …

“We’ve seen a huge V-shaped rally that has now taken most indices back above their 50-day moving averages. While it’s nice to see the market make such a big comeback, technicals still don’t look especially bullish here … Given short-term overbought levels that result in ‘Poor’ timing scores, we’re expecting some sort of pullback soon. …

“One near-term breadth indicator that is certainly overbought is the S&P 500’s 10-day advance/decline line. … After hitting the fourth most negative reading on record in late December, we have seen a complete reversal to the upside.” 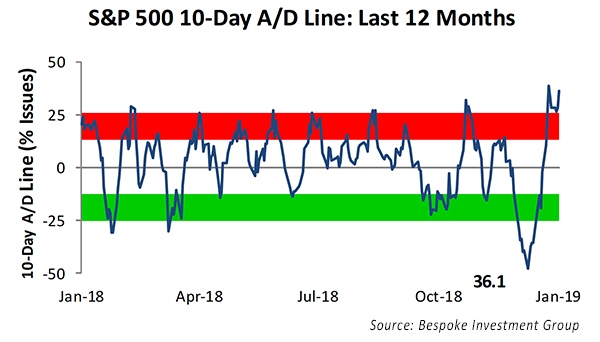 Several technical analysts point out that historical precedent in similar cases usually points to a retest of prior lows, prior to a push back toward old highs. While acknowledging that precedent, one well-known analyst wonders if this time is different. The analyst notes that having two 90% upside price and volume breadth days on the NYSE right after the market turns has led to healthy market gains over the next three- and 12-month periods.

No matter what occurs, this column has pointed out many times that there is a huge difference between investor passivity and investor patience.

Flexible Plan Investments (FPI) counsels patience, in the sense of financial advisers and their clients allowing FPI’s array of actively managed strategies to work as they are intended to do throughout full market cycles—mitigating risk, finding new ways to dynamically diversify, and smoothing out the long-term volatility typically found in any asset class.

Jerry Wagner, FPI’s founder and president, wrote in an article in 2015 that had a fun “Star Wars” theme, “Maintaining an active defense can help one avoid the full fury of a market crash, such as those in 2000 and 2007. Hedging your market bets with a number of defensive strategies improves your chances further. The goal is for your investments to survive until they are needed in retirement.”

Later in the article, Jerry quoted the wise, inscrutable Yoda, “Patience you must have, my young padawan.”

Last week was a strong week for equities. This was reflected in our equity strategies, which were generally long the equity markets. WP Aggressive led our lineup of strategies, gaining more than 5% for the week. Our Low Volatility/Rising Dividends (LVRD), Classic strategies (including Classic Better World and Classic Faith Focused), and Market Leaders sector strategies were runners-up.

Long-term Treasurys were down significantly last week, leading to a difficult environment for several of our bond strategies. Fixed Income Tactical and Government Income Tactical were among the worst performers for the week (though they did outperform their benchmark).

The majority of our strategies continue to maintain some level of defensiveness as market volatility remains elevated.