Gold closed at $1,280 per ounce last week and remained on track for its third straight weekly gain. This was despite Friday’s (1/4) stronger-than-expected U.S. employment report, which strengthened the U.S. dollar. The following is a weekly basis graph of the gold continuous contract. 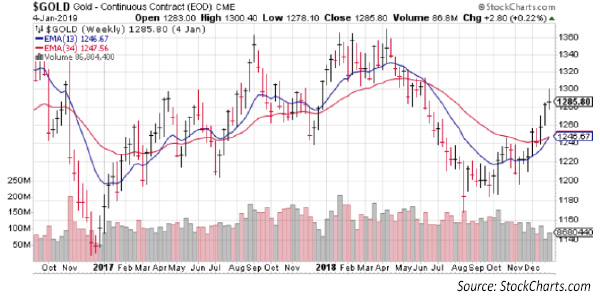 Friday’s one-day dip in gold prices presented an opportunity to increase portfolio holdings of the precious metal, which is positioned to make a comeback in 2019.

It appears that both the strong U.S. dollar and equity market moves over the last year are now spent. The Federal Reserve’s series of increased interest rates has cooled the equity markets, while its present pause has taken away the fuel that propelled the dollar’s rise. Many analysts now speculate that, absent any significant signs of inflation, the Fed may not raise rates again until after the 2020 election.

Kitco News reports, “‘After battling some severe headwinds, including a strong U.S. dollar for most of 2018, gold is looking ‘to take the bull baton from the U.S. dollar and stock market’ in the new year, said Bloomberg Intelligence (BI) in its January Commodity Outlook. …

“‘It looks like the U.S. dollar has run ‘too hot’ and its strength is unlikely to last’, Bloomberg Intelligence pointed out.

“‘On an end-of-year basis, the trade-weighted broad dollar has never been higher. Sustaining that strength should require continued U.S. stock-market outperformance vs. global equities, and more rate hikes,’ Mike McGlone (BI’s senior commodity strategist) said, ‘These dollar-bullish drivers are near exhaustion vs. commodities. …’

“‘Technicals are explosive for the metal, which trades in its narrowest 36-month range in almost two decades,’ McGlone said. ‘The three-year market picture for gold indicates prices migrating higher within an increasingly compressed range, which typically portends a breakout.’”