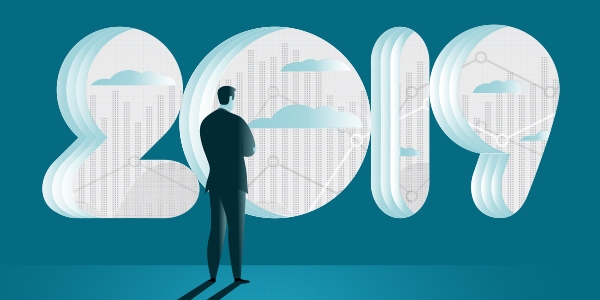 Last week, the markets recovered some of the previous week’s losses. The NASDAQ gained nearly 4%, while the S&P 500 and Dow Jones Indexes each tacked on nearly 3%.

Bond yields tumbled as investors continued their flight to safety, despite the Federal Reserve’s unwavering rate-hike path. The fall in yields and subsequent rise in prices (yields and prices move inversely) has brought up the value of bonds, and bonds are now outperforming stocks for the year.

The lowering of yields has dropped the yield curve (10-year bond versus three-month bills) to below 25 basis points. The following chart demonstrates that, while this is close to the feared recession-predicting “negative yield curve,” history actually shows that the present level does not make a recession imminent. Only in 1973 did it occur within one year. Otherwise, the average is 2.5 years (median 1.6 years) before a recession strikes. 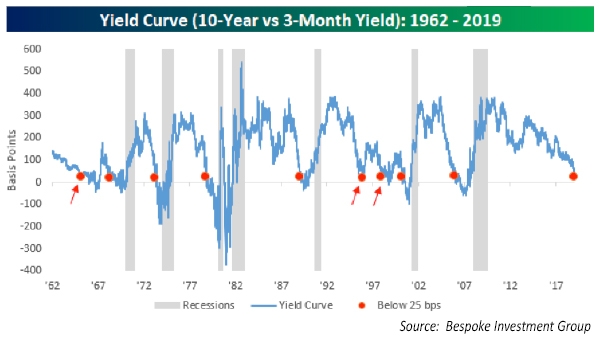 When the yield curve still had 21 points, the S&P has historically (since 1965) returned a normal positive amount (about half of 1%) over the next one month, and superior returns over the next three- and six-month periods. The last six months of the year, however, has been below average.

Gold had a strong week, picking up nearly 2%. It continues to be the best performer during the current flight to safety.

Monday we closed out 2018, which was full of ups and downs. The year started with one of the best Januarys in years. But February brought intense market volatility, which faded through the spring and summer months. Then came the fourth quarter, which ended up being one of the worst in recent history, pulling the S&P and other stock market indexes into correction territory. The year closed out with a late—but welcomed—rally, and economic signals remain strong going into 2019.

The Federal Reserve is expected to raise rates two to three times in 2019. Yet even  Fed Chair Jerome Powell sees growth slowing down. Regardless, we should not lose sight of the fact that growth is still occurring. Economic data remains fairly stable, and market volatility, while likely to remain during 2019, is still lower than crisis-like levels. Like most years, it will likely be important for investors to manage their investment risk in the new year.

Our strategies continue to employ defensive moves to minimize losses and even have the chance to profit from the market turbulence, should it continue. Our Self-adjusting Trend Following, Volatility Adjusted NASDAQ, and Fusion strategies all remain short the market. Our Market Leaders strategies are almost entirely in cash as the Market Environment Indicator (MEI) that governs the strategies remains negative.

The extent of our strategies’ defensiveness can be demonstrated with the following chart below. Most strategies continued to outperform the S&P 500 for all time periods in the fourth quarter. But for the last five days, as the markets bounced higher from their recent lows, few of our strategies moved appreciably higher. This is because they maintain their defensive posture as the market sorts out whether the last five days were the result of a “dead cat bounce” or a return to rally mode. 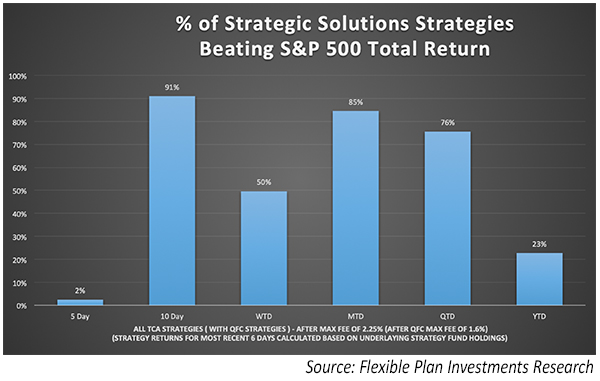 The one notable exception to our defensive stance has been our Classic strategy. In past Market Updates, I have explained that this strategy’s main indicator looks for major changes before it will switch. That’s why it has generated such a great record as stocks have rallied since 2009. It does not get faked out easily.

The MEIs that govern our All-Terrain and Volatility regimes have not changed lately. The former, which looks only at economic indicators (inflation and growth in the economy), is still rated positive for stocks. The latter regime focuses on volatility and remains pointed toward more volatility for stocks as we enter the new year.

Political Seasonality is positive until next week (our Political Seasonality Index is available post-login in our Solution Selector under the Domestic Tactical Equity category). This suggests that we could see more of a rally in stocks, at least in the very short term.

The whole team at Flexible Plan is looking forward to 2019. Each new year presents us with fresh challenges and triumphs, as well as the continued opportunity to help investors preserve and grow their wealth as they progress toward their financial goals.